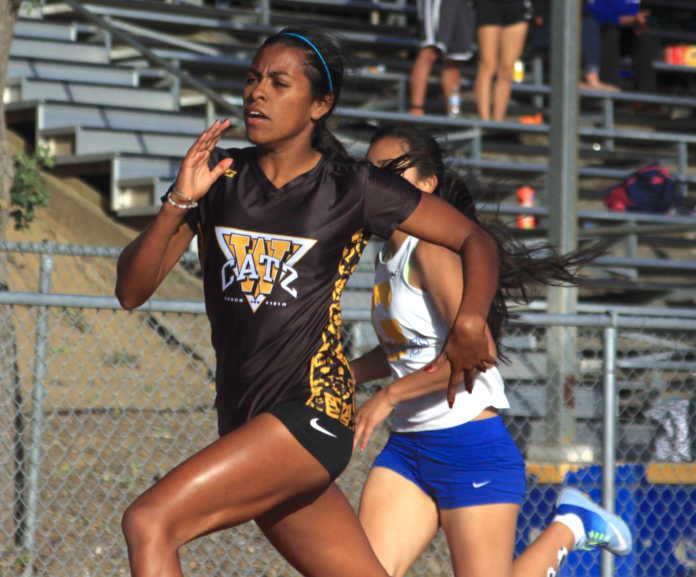 Daniela Salazar’s teammates and coaches were running out of names to dump on the Watsonville High star junior runner.

Salazar, who broke the school’s record in the 800 just weeks before, turned in an incredible performance at Friday’s Monterey Bay League division finals, winning two individual events, taking second in another and carrying the 4×400-meter relay team from last to second place and into next week’s MBL Master’s Meet.

But the most impressive part of her night came on the final lap of the 4×400. Salazar, the anchor leg, inherited roughly a 50-meter deficit but passed up a pair of teams by running a 62-second split to secure a second-place finish.

Salazar’s final kick down the last 100 meters drew hectic cheers from the crowd still on hand at the Gilroy High track, as she almost ran down Seaside High’s winning relay team.

“That’s Daniela,” Cornett said. “I even told her before the race that we didn’t have a shot at the team title and she didn’t need to push it. I’m dumbfounded right now.”

She got plenty of high-fives from her teammates and opponents alike after the herculean performance. And she also got big hugs from her fellow relay team members, who had their season extended by a week.

“I told her, ‘you’re Daniela Salazar, you can do anything,’” said Watsonville senior runner Stephanie Villa. “I’m happy for her. She has a big senior season coming up.”

Villa capped her final season by defending her championship in the 1,600. She outlasted Monterey High’s Itsel Oseguera Reyes with a season-record time of 5:41.94.

Despite dealing with leg injuries throughout her senior season, Villa said she was satisfied with her final stretch and hopes to run well at the Master’s Meet, which serves as the MBL’s Central Coast Section qualifying.

The Master’s Meet is set for May 12 back at Gilroy High.

“I’m excited,” said Villa, a CCS qualifier last year in the 3,200. “I’m looking forward to the training I’m gonna get this week.”

She was the only other Watsonville athlete to record a win. The Wildcatz, who went undefeated in league dual meets, finished in a tie for second as a team with Gilroy High at 95 points. Christopher High, which won only three events, won the team title with 106 points. Monterey was fourth (94), Seaside High was fifth (42), Monte Vista Christian took sixth (38) and Pajaro Valley High finished seventh (20).

Monte Vista Christian freshman Delaney Ezeji-Okoye easily won the pole vault with a leap of 10 feet, 6 inches and also scored some points for the Mustangs with fourth-place finishes in the 100 (13.19) and 200 (27.22). The times in both of her sprints were good enough to advance to next week.

“I felt relieved,” said Genis, who stands just 5-foot-2. “Now I know that it’s going to be hard for the next person that wants to do high jump and set the school record. As a short person, I’m proud of myself. Yes, I’m short but I can say, ‘look, I can jump this height.’”

Genis was mere centimeters away from clearing 5-0 on her final attempt of the day but her legs clipped the bar as she flew into the landing pad. That, she said, will keep her hungry for next week.

“I’m not totally happy because I felt like I could’ve cleared five,” Genis said. “My last one felt good. The arc was good but I just didn’t kick my feet up.”

Watsonville’s Samantha Aruiza qualified for the Master’s Meet in the pole vault (7-6).