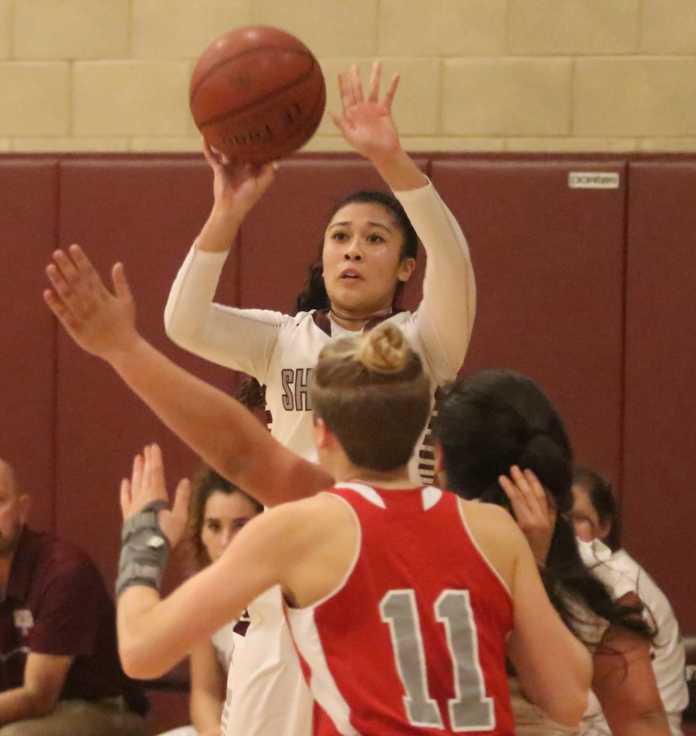 WATSONVILLE — St. Francis’ motto of “heart over height” was put to the test on Thursday night.

Its conditioning and depth, too.

“It took everything we had tonight,” said St. Francis senior center Tanya Gallo.

It was more than enough to close out the first round of Pacific Coast Athletic League Cypress division play on a high note.

St. Francis held off Carmel’s second-half push to keep its league record unscathed with a 52-43 win.

The victory pushed the Sharks’ (9-9, 5-0) overall record back to .500, and, more importantly, it gave them a two-game lead over everyone else in the PCAL-C.

“Going into the second half of the season, we know how the other teams play, and they know how we play,” said St. Francis senior point guard Janessa Yniguez, “so it’s going to be even closer.”

Thursday’s game was a little closer than they would’ve liked, but the Sharks withstood the Padres’ best punch and responded with a knockout counterblow.

St. Francis led 26-19 at the half, but Carmel sliced the lead to one midway through the third quarter. The Sharks answered with a 17-2 run which bled into the final stanza and put the game away.

Yniguez scored a game-high 26 points with seven 3-pointers, and her defense and passing helped turn the tide, too, during the team’s closing run. Gallo got a pair of easy layups thanks to Yniguez’s playmaking in transition, and sophomore wings Mariah Lyle and Audrey Hernandez also benefited from their captain’s unselfishness with easy buckets down the stretch.

“We have to rely on our teammates. It’s not one-on-five. It’s five-on-five. You have girls behind you,” Yniguez said. “It’s a sisterhood. We’ve really built this community, this family. My teammates are some of my best friends now.”

The Sharks carry only eight players on this year’s youthful roster — Yniguez and Gallo are the lone seniors — and they needed all of them on Thursday.

They fell into foul trouble early, as Carmel was in the bonus with three minutes left in the opening quarter. Yniguez and Gallo both said the team played a bit too greedy on defense, reaching in when they shouldn’t and picking up unnecessary fouls.

Laulotu showcased a plethora of moves in the post to go along with her strength on the offensive glass, but the Sharks offset her brilliance in the paint by pushing the pace of the game in transition and running a hybrid triangle defense to limit her opportunities on the block.

She finished with a team-high 17 points.

The Sharks, who threw Gallo and 5-foot-8 juniors Darlene Toscano-Rodriguez and Grace Kovacs her way, considered that a win.

“I thought if we could keep her under 30, we’d have a good chance to win,” said St. Francis interim coach Adam Hazel. “The girls competed really well. I was very impressed with how we answered the challenge.”

That’s been a common theme for the Sharks all season.

After previous coach Meghan Garcia was dismissed three games into the year, St. Francis banded together and rallied around Hazel, the school’s athletic director and former football coach. Though the Sharks finished the preseason with a three-game losing streak, their confidence heading into the PCAL-C season never wavered.

So far, their blind faith in each other has been rewarded, as St. Francis is within striking distance of its first league title since the 2010-11 season, a campaign in which the school still called the Santa Cruz Coast Athletic League home.

“We didn’t know what was going to happen,” Gallo said. “We were practicing really, really hard. We were running, doing drills and trying to get ourselves ready for league, but we didn’t know what to expect… This year, I guess we just really wanted to get some banners.”

Editor’s Note: Coverage of this game will run in the Feb. 1 edition of the Pajaronian.