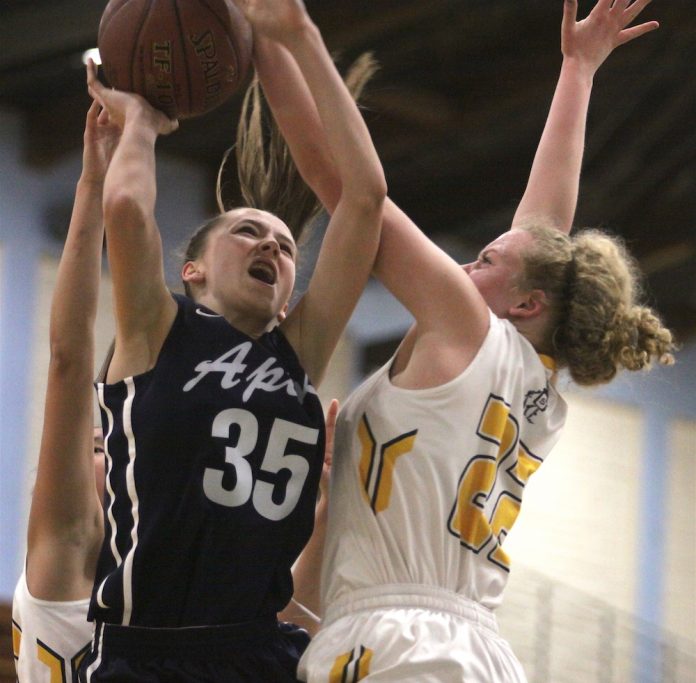 APTOS — The No. 2-seeded Aptos Mariners came up short of their first Santa Cruz Coast Athletic League championship since the 2009-10 season on Saturday evening, falling to the red-hot Soquel Knights, 58-43, in the league tournament final at Cabrillo College.

Soquel (20-5) — the 11-1 SCCAL regular-season champ — hit 10 3-pointers, including five during the second quarter, and led by as many as 18 en route to clinching the outright league title.

“There was nothing we could do that we didn’t,” said Aptos head coach Stefan Hocom. “They came out and they played like a championship team.”

Sophomore guard Hannah Hocom, Stefan’s daughter, led Aptos (22-4) with 11 points and senior guard Teal Maixner added nine points, eight rebounds and three steals but it wasn’t enough to upset the top-seeded Knights, who had revenge on their minds after the Mariners handed them their lone league loss on senior night.

“That was a tough loss but we really learned from that,” said Soquel senior guard Nayeli Rodriguez.

Rodriguez hit a pair of 3-pointers before the half to put Soquel up by 16 at the break.

Aptos trimmed the lead to 10 twice in the third quarter and once again in the fourth with 3:20 left to play but the Knights never let the lead dip to single digits.

The Mariners had won eight straight before Saturday’s championship tilt, including an impressive 62-43 tournament semifinal win over last year’s league champ, Scotts Valley, on Wednesday, but they could not continue their roll against a determined Soquel squad that took the lead on Thornton’s 3-pointer two minutes into the game and never looked back.

Aptos tried to run its drive-and-kick offense with Hannah Hocom and freshman guard Gabby Giuffre but the Knights’ defense crashed down well enough to bother their attacks to the rim, forcing them to push the ball out to open shooters. But the Mariners’ perimeter players could not make Soquel pay.

Offensively, Soquel broke down the Mariners’ 2-3 zone from the inside out, feeding the ball into 6-foot-1 sophomore center Mckenna Finch, who found open teammates around the perimeter all night.

Thornton’s 3-pointer midway through the second quarter gave Soquel its first double-digit lead of the night and started a 10-2, quarter-closing run, which the Mariners never recovered from.

“They moved the ball, they were unselfish and they hit their shots,” said Hocom, who added that he was proud of his youthful team, which started just one senior, despite the loss.

“Sometimes you win, sometimes you lose,” Hocom said. “No matter what you do, you can play well and lose and you can play bad and win. We took good shots and they didn’t fall. What are you gonna say?”

The Mariners will continue their season on Thursday in the second round of the Central Coast Section Division III tournament. They will host the winner of a play-in game at 7 p.m.

Hocom said a CCS championship would be a great way to end the season and would go nice with their CCS Scholastic Championship they were recently awarded.

“This team took it seriously,” Hocom said. “We didn’t win this championship but a couple weeks ago we got that one. That’s a big deal. It puts things into perspective.”