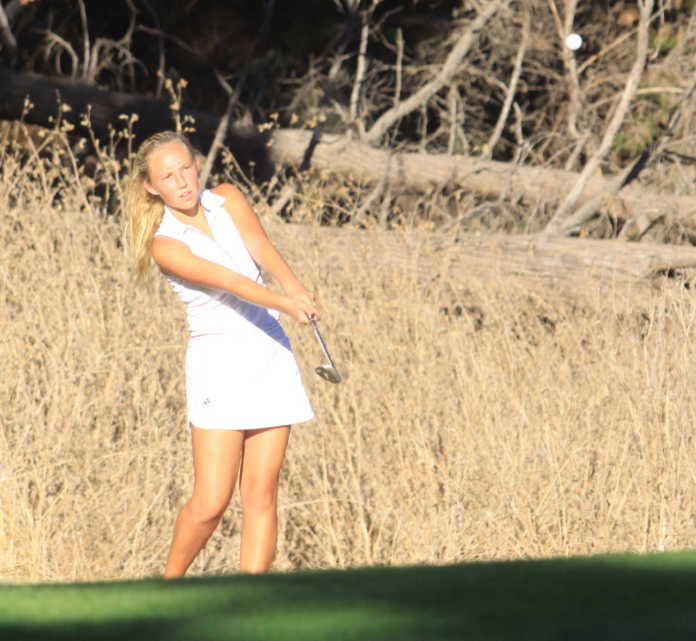 SANTA CRUZ — Running out of time and rushing to gather her things at home in the hours before Tuesday’s Santa Cruz Coast Athletic League girl’s golf championship, Amanda Fort couldn’t find a pair of matching socks so she went with a black sock on the right foot and a white one on the left.

On the links at DeLaveaga Golf Course, Fort never rushed, she never forced herself into a mismatch and the blistering near triple-digit heat might have made her break a sweat but the competition never had her flustered.

Fort not only repeated as the SCCAL champion and earned the league’s lone Central Coast Section qualifying spot but she did it with a surprisingly impressive final nine holes to card a career-best 10-over par 80.

Her mark was 13 strokes lower than last year’s winning score at DeLaveaga. That was also the last time she played a full 18 holes at the course.

“I’m not sure how I did it,” Fort said. “I think it just slowed down and I kind of trusted myself with my aim.”

Fort, a senior, was down four-strokes to Scotts Valley High freshman Candace Shi but erased the deficit with a masterful back nine, which featured a birdie, six pars and only two bogies. Her drives were solid, her chips were dead on and her putts were as good as they’ve ever been. She finished the day with a little more than 30 putts in total, a true mark of a good outing.

Simply put, Fort was far and away the best golfer on the links for the final two hours of Tuesday’s championship.

“Amanda, she’s just got that fluid full swing and when it happens it happens. She’s a natural,” said Aptos co-head coach Bill Tsudama. “She’s really been working hard on her putting and she had a pretty good day. On a day like today, when it’s so easy to lose your focus because of the heat, awesome job by her. It’s amazing. I wish I could’ve saw it.”

Tsudama was busy marshalling the third of four groups of golfers. In total, the SCCAL had 14 golfers compete for the title and league’s lone CCS berth on Tuesday. All but one, Scotts Valley’s Natalie Mitchell, completed the full 18 holes through the brutal heat.

Shi, who was considered the favorite to dethrone Fort, finished runner-up, firing an 85, and Santa Cruz High’s Sigi Allen matched her finish from last season, taking third with a score of 92.
St. Francis High’s Izzie Mendez did not compete against SCCAL competition this season because the Sharks did not have enough players to field a team. But the sophomore opened some eyes on Tuesday, finishing fourth with a 94.

“I felt hot,” joked Mendez, who in the spring led the school’s boy’s team and practiced plenty throughout the fall on her own. “Really though, I felt really comfortable. There wasn’t any real nervousness. I had a fun time. Everyone was happy. No one had a bad attitude even if we had bad shots.”

And that included Fort, who shanked a pair of her swings on the opening hole and carded an eight to start her round. She quickly overcame the rough start and, hole by hole, pieced together her best day of her high school career.

The hot finish is something Fort hopes can carry over to next week’s CCS championships at Laguna Seca Golf Ranch in Monterey, a course she has never played.

“How can you not have a bit of confidence after shooting an 80 and putting well and chipping well,” Tsudama said of Fort, who last year took 67th of 100 golfers at CCS. “Hopefully she can keep this going and have a great finish.”

To go along with her SCCAL individual championship, Fort also helped the Mariners capture the SCCAL team championship for the fourth straight season. Along with Fort, fellow seniors Megan Eldredge and Gianna Marinshaw and juniors Sam Castaneda and Italia Riccabona were also a part of the special mix that powered Aptos to a perfect 8-0 season.
“It’s super exciting and it’s been super fun to be out here with everyone and it’s definitely sad because it’s the last year,” Fort said. “I’m sure there’ll be incoming freshman and other girls that want to join the team next year.”

Fort, Eldredge and Marinshaw won’t be the only Mariners leaving the team. After eight seasons, Tsudama is stepping away from the program. His daughter, Chloe, who was a star golfer for Aptos, recently graduated from college and Tsudama said he wanted to spend more time with family.

“I think I’ve put in my time,” Tsudama said. “It’s time for me to move on and let somebody else take over.”