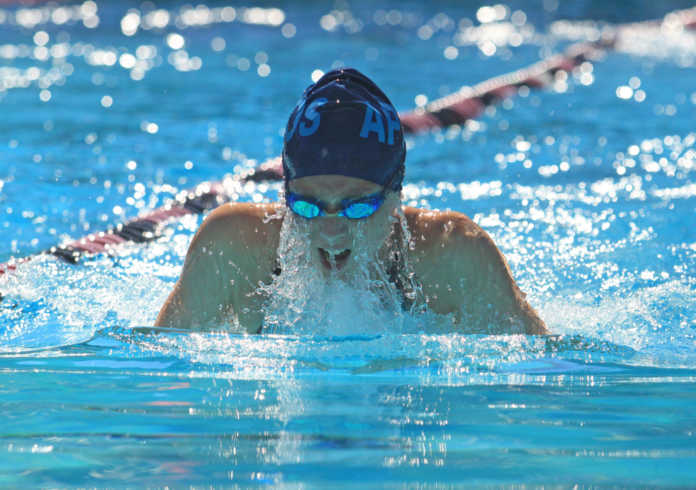 The bell rang to signify the final lap, the announcer was yelling her name and the crowd was screaming out “go!”

Really, Bockman was racing against herself, dusting the rest of the competition by a little more than half a minute and nearly lapping second place to three-peat as Santa Cruz Coast Athletic League champ in the 500-yard freestyle. But the push from the people outside the pool didn’t hurt.

Her race was a microcosm of the Mariners’ day.

For the seventh straight season, the Aptos girls captured the SCCAL Swimming and Diving Team Championship on Saturday at San Lorenzo Valley High in Felton.

The Mariners, who also went undefeated in regular season dual meets, had  both the stars and the depth to accumulate 366 of the possible 1,202 points. Soquel High finished a distant second with 258 and Scotts Valley High was third with 198. Harbor High was fourth (110), Santa Cruz High took fifth (107), St. Francis High placed sixth (89) and SLV rounded out the group in seventh (74).

Bockman, committed to NCAA Division I UC Davis, was one of three Mariners that finished the day as multi-event winners. Sisters Lauren, a sophomore, and Madi, a freshman, McBride also won more than one race.

The trio teamed up in the 400 free relay and 200 medley relay and cruised to wins. Sophomore Grace Bockman was the fourth member in the 400 and junior Kristen Malone completed the Aptos quartet in the 200.

But the McBrides were not nearly as dominant in their individual wins as Bockman proved to be in hers.

Along with defending her title in the 500 free with a season-best time of 5 minutes, 16.38 seconds, she also won the 200 free for the fourth straight season with a time of 1:59.11, which was just a tenth of a second off her league-season best and nearly 10 seconds faster than second-place finisher Fiona Camakaka of Santa Cruz. Both her times easily qualified her for the upcoming Central Coast Section Swimming and Diving Championships on May 12-13 at the Santa Clara International Swim Center.

Bockman said she was satisfied with both of her times but will need to improve heading into her fourth trip to CCS, where she’s hoping to find the podium with a top-six finish.

“She can do it,” said Aptos head coach Jim Triplett. “The 500 is different each year. Sometimes you can win with one time and you might take the same time the following years and get third, fourth and the next year it’s 10th. It has a lot of fluctuation so I don’t know what it’s going to take to get into the top eight. But that’s what she wants and she’s going to fight for it.”

Triplett, who is in his 38th season with the Mariners, said that all seven SCCAL championships during this streak have been special but this season was different from the rest. Aptos had a little more depth than in prior seasons, Triplett said, and it shone through with 30 top 10 finishes over the 11 events on Saturday.

“That was the key,” Triplett said.

It also doesn’t hurt when a freshman — Madi McBride — can come in and fill several holes left by multiple-time league champion Jaime Chamberlain, who the Mariners lost to graduation after last season.

McBride won the 200 individual medley (2:17.03) and 100 backstroke (1:02.49), while also helping the two relay teams record wins. Both her times were good enough to qualify for the CCS Championships.

“I just get lucky,” Triplett said. “We got kids that got fast young.”

McBride, whose older sister Annika, a senior, also competed for the Mariners on Saturday, won both of her races by nearly to five seconds but said she wasn’t racing against the competition but the clock.

“I knew I had to work for it but I think I was expecting to get that CCS time,” said

McBride, who trains with the Quicksilver Swimming in San Jose during the offseason.
Lauren McBride won the 100 breaststroke (1:11.39) but missed the CCS qualifying by less than a second.

St. Francis scored six top-10 finishes. Freshman Ebony Held’s seventh-place finish in the 200 IM with a time of 2:38.94 was the Sharks’ best performance of the day.