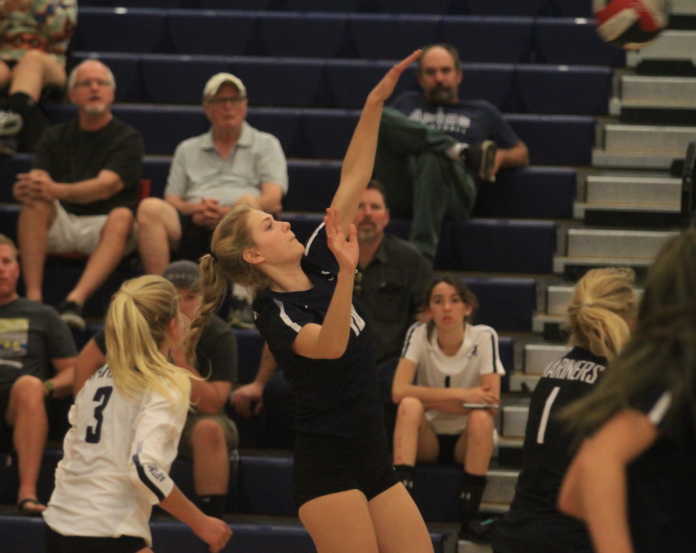 APTOS — If the first three weeks of the Santa Cruz Coast Athletic League season are any indication, the final four weeks are going to be a wild, fun and unpredictable dash to the finish line.

The Aptos High Mariners added yet another wrinkle to the SCCAL championship chase on Thursday night, handing the Mt. Madonna Hawks their second loss of league play via a 25-19, 25-22, 25-20 sweep.

The win keeps Aptos (4-7, 4-2) in the hunt for its fifth straight league title despite suffering back-to-back losses a week ago. It also stakes the Mariners to a tie for second place with Mt. Madonna (6-2, 4-2), which just two days before gave Soquel High its first SCCAL loss.

“[This] proves that the league title is completely up for grabs,” said Aptos head coach Ashley Tennant. “It means that no team should feel unimportant or unbeatable.”

Although the Mariners entered the season having won 28 consecutive regular season league games, Soquel (9-3, 5-1), with last year’s SCCAL Player of the Year, Maggie Walters, leading the way, was believed to be the favorite to win the league. But the Hawks paid no attention to those projections on Tuesday, sweeping Soquel and dropping the Knights into a tie for first place with Harbor High (8-6, 5-1).

With a win, Mt. Madonna could have knocked Aptos completely off course and kept pace with the top two teams in the league but the Hawks once again came up short against the Mariners. Mt. Madonna has not beaten Aptos since its magical 2007 season in which the Hawks won titles at the SCCAL, Central Coast Section, NorCal and state levels.

Head coach Erin Mitchell was a star sophomore setter on the Hawks’ squad during that season.

“It was having that pressure and a little bit of nerves,” Mitchell said. “Some of it unnecessarily, I think.”

And Aptos didn’t cut Mt. Madonna any slack either.

Powered by a multi-headed attack, the Mariners jumped out to early leads in all three games and coasted to a trio of easy wins. Junior outside hitter Jillian Rodriguez had nine kills, while senior opposites Madelin Smith and Lauren Picone combined for 11 kills.

The Aptos defense also made life tough on Mt. Madonna’s attack, as cousins Cam and Peyton Dueck hit the deck several times and combined for 24 digs from the backline.

“Our plan is always to start off strong and push all the way through. I think we did a really good job of that,” said Cam, a sophomore. “They’re a really scrappy team but it was super fun.”

After struggling to find an offensive rhythm over the past few weeks, Aptos looked like it was rounding into form on Thursday. Smith, an All-SCCAL First Team selection last season, was back to her usual precise self on the attack and setters Dani Hewitt, a senior, and Chloe Manor, a junior, were guiding their teammates nicely.

“We started off good on offense and then we kind of dipped but I think we’re going back up again,” said Rodriguez, who also had three aces.

Both Aptos and Mt. Madonna will finish off their first round of SCCAL play on Tuesday. The Mariners will get somewhat of a breather as they travel to Scotts Valley High but the Hawks will have their collective hands full at home against Harbor.

Mitchell said she saw a sign of life during the final game that bodes well for her team heading into the rest of the league season.

“We had to find some confidence to know that Aptos is beatable and I think we found it halfway through Game 3,” Mitchell said. “I think we’ve been kind of squeaking past some of the teams in our league and I think that as much as this loss sucks, it’s a good loss. We’re going to bounce back because I don’t think anyone was happy about the way it went tonight.”