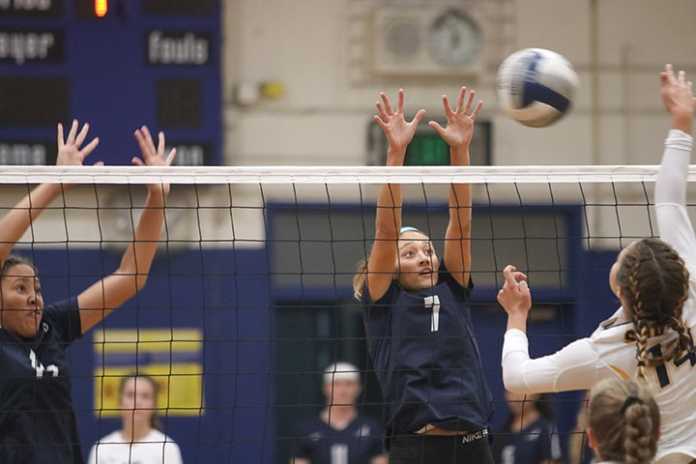 SOQUEL — The Aptos High girls’ volleyball team began Tuesday’s Santa Cruz Coast Athletic League opener with a bang and were on the verge of stealing one on the road against the defending league champion.

Aptos junior outside hitter Peyton Dueck said they came out with energy and confidence against Soquel, which has now won the past five meetings with Aptos dating back to 2017, but it wasn’t enough to get past the reigning SCCAL champion.

“They have a great team all-around,” Dueck said. “I feel like they were just more together as a team tonight and they felt confident throughout the entire game and didn’t let up.”

Dueck said she always has fun going up against the Knights, especially because they have two great outside hitters that can really play.

Senior Sam Strah had a team-high 21 kills and 24 digs to go along with a pair of aces, while sophomore Ciara Cantlen finished with 17 kills, 20 digs and three aces for Soquel. Junior Hailey Strah added 12 digs for the Knights.

“We both just wanted it so bad,” Dueck said.

Aptos jumped out to a quick lead in the first game and didn’t let up, winning it 25-21.

However, that slowly started to disappear as Soquel took an 18-10 lead in the second set. The Mariners got sloppy with the passing game and their serves didn’t look as sharp.

The third set was no different, as the Knights went up 11-6 and looked to run away with the match.

The Mariners weren’t quite done, yet, as Ackerman helped them get to within two at 22-20. But the Knights closed out the third set on a 3-0 run and never looked back.

Aptos coach Lake Merchen said they had a good scheme to slow down Soquel by putting pressure with serving and blocking on the defensive side, but early mistakes in the second set took them out of their game plan.

“Right away in that second set we started missing a bunch of serves and that put a lot of pressure on us to side out very quickly,” Merchen said. “I think that pressure got to us and ate away at our confidence a little bit.”

Soquel coach Jeanine Haldi said Tuesday night’s win was all about managing errors, which meant not giving points like they did early in the match.

“Our offense usually takes a little while for it to get going, which is our M.O. and which I’m fine with. I have all the confidence in the world in them,” Haldi said.

The fifth-year coach said the Mariners are always a tough team to go up against and enjoys the competitive spirit when both teams get together.

Haldi said she especially likes Dueck, who she compares to the type of players she has at Soquel.

“Kind of unstoppable,” she said.

The loss, Dueck said, will serve as motivation for the rest of the SCCAL season.

“We really just need to focus on every game forward,” Dueck said.

Up next, the Mariners play against San Lorenzo Valley on Thursday at 6:30 p.m. in SCCAL play.

Editor’s Note: This article will be published in the Sept. 13 edition of The Pajaronian.