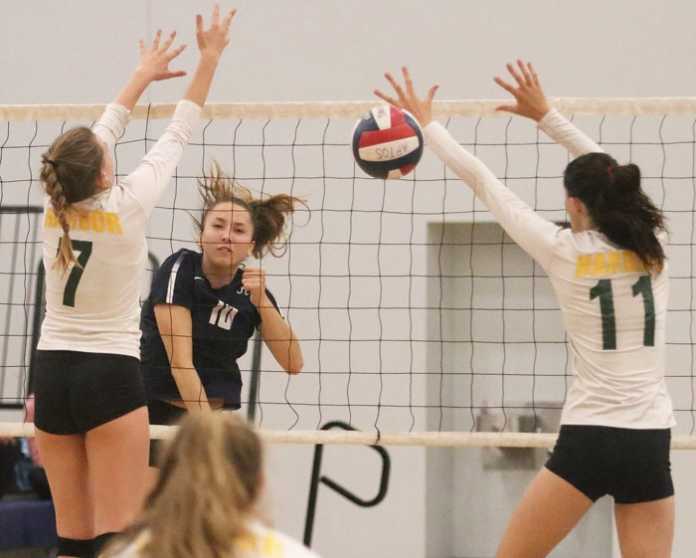 APTOS — Aptos High head coach Lake Merchen said when the Mariners play with confidence they are a tough group to beat.

“That’s been the biggest struggle for us this whole season,” the first-year head coach said, “believing that we are one of the top teams, and having the confidence to go out and compete every point like we’re a top team.”

They received a big boost of confidence on Tuesday night.

With all three of their setters out with concussions, the Mariners scrapped their way to a 16-25, 30-28, 26-24, 25-11 win over Harbor High in a battle of last year’s Santa Cruz Coast Athletic League co-champions.

The win not only upped the Mariners’ (9-6, 1-1) confidence, but also helped wash out the sour taste in their mouths from last week’s four-set loss to rival Soquel High in both teams’ league opener.

“I think [the loss] was on our minds but it wasn’t in a bad way,” said Aptos sophomore outside hitter Peyton Dueck. “It was more to push us to be better.”

Dueck tied with senior outside hitter Jillian Rodriguez with a team-high 18 kills and made 13 digs.

Rodriguez also added a team-high 17 digs and two blocks, and junior opposite Alana Patyk-Randa dished 38 assists after stepping in as the team’s starting setter on short notice.

Patyk-Randa also made 16 digs for the Mariners, who had junior opposite Natalia Ackerman, sophomore middle Emilia Jeffe and junior middle Gabby Giuffre play extremely well down the stretch to help them pull away.

“We really stayed focused and trusted each other,” Giuffre said. “Everything was mainly built on trust. Trusting our system, and knowing that no matter what we’re going to be there and we’re going to get that next point.”

Ackerman had eight kills and six blocks, Jeffe finished with seven kills and four blocks and Giuffre had seven digs and three timely rejections, including a nasty stuff block to even the match at one game apiece.

Although the Mariners entered the season as the five-time defending league champions, the expectations for the season were up in the air following the graduation of nine seniors.

So far, Aptos has shown it is still very much a threat for the league crown.

“We definitely lost a lot of players,” Dueck said, “but that didn’t push us back.”

But the Mariners snapped out of their slump in the second set behind their defense. Aptos faced a trio of nail biting set points, but survived all three to even the match.

The Pirates again pushed the Mariners to the brink in the third set, holding a set point at 24-23, but Jeffe evened the score with a kill, and Dueck carried them across the finish line with a stuff block and a rocket-like kill.

Aptos cruised the rest of the way.

“Once we had that lead, we just felt really confident and kept pushing until the very end,” Dueck said.

In other volleyball action from the week of Sept. 13-19:

Julie Che had 10 kills, four aces and eight digs in the loss.

LINE OF THE WEEK