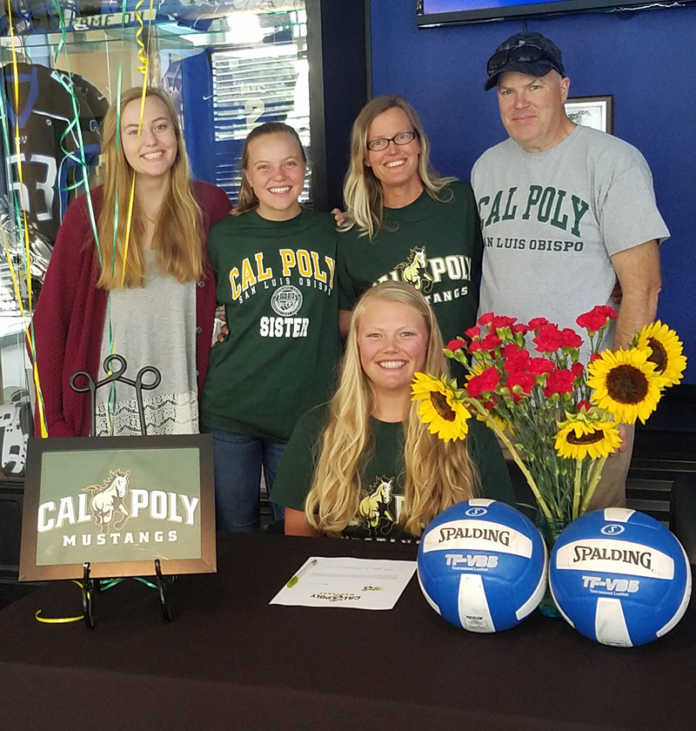 WATSONVILLE — Volleyball has been a part of Sjea Anderson’s life since birth. She learned how to walk on the courts of Bethany College in Scotts Valley where her mom, Margaret, coached the volleyball team and she has never been away from the courts or beaches for more than a day.

The game will continue to be a part of her life for at least four more years.

Anderson, flanked by family, friends, teachers and coaches, signed her letter of intent to play beach volleyball at NCAA Division I Cal Poly in San Luis Obispo on Thursday at Monte Vista Christian.

“I’m ecstatic,” Anderson said in a phone interview on Thursday. “I’ve only heard good things about the school, the area, the volleyball program. I can’t wait to get there.”

Anderson, a AAA rated beach volleyball player who calls Main Beach in Santa Cruz her home, starred at MVC for the last four years and led the Mustangs to their first Central Coast Section Championship since 1997 this season.

She was named the Most Valuable Player of the Monterey Bay League Gabilan division and earned a spot on the MaxPreps’ All-State Division IV girl’s volleyball team after leading her squad in kills (438), kills per set (5.2) and digs (358).

“She just had that knowledge of the game and she wanted to improve every time she stepped on the court,” said Monte Vista Christian head coach Kiley Woods in a phone interview on Thursday. “She loves the game and you saw that through her entire high school career.”

Anderson said she made the decision to pursue beach over indoor during the offseason between her sophomore and junior seasons. One way or another, Anderson said, she wanted to play volleyball in college.

“I love volleyball,” she said. “I play it almost every single day. I can’t stay away from it and I don’t know why. It just makes me happy.”

Woods said she can’t wait to see the jumps Anderson will make as both a person and a player at Cal Poly.

“I think it’s a perfect fit for her,” Woods said. “She likes to be pushed academically and Cal Poly had great academics. You look at the whole package — the school, the size, the academics, the volleyball, the area — I think she’s going to thrive.”

Cal Poly is a well-respected and sprouting Division I program that finished the 2017 season at 15-23 overall and received votes to be ranked among the top 15 teams in nation for the AVCA coaches poll.

“I think Todd Rogers can take my game to a whole ‘nother level,” said Anderson, who plans to earn a degree in biology. “That’s the most exciting part.”

Her teammate, Greysen Gilroy, who was MVC’s starting setter each of the last two seasons, made her decision to play indoor volleyball at Gavilan College.