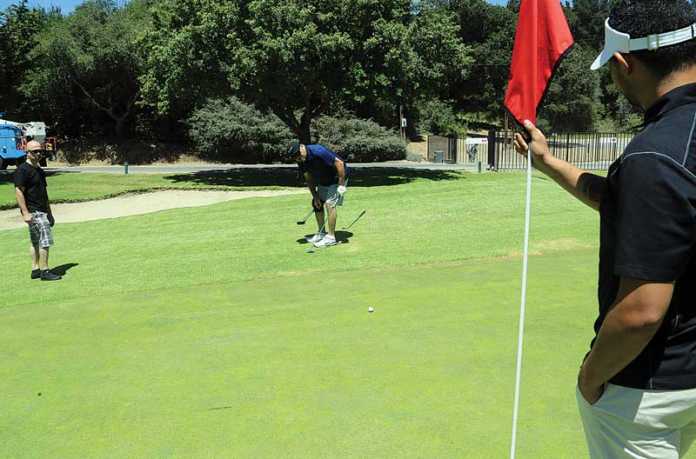 WATSONVILLE — On Friday, the Pajaro Valley Association of Realtors (PVAOR) held its annual golf tournament with proceeds to be donated to Watsonville’s own women’s shelter.

“Pajaro Valley Shelter Services was chosen because they give back to families in need — providing homes, transitional housing and just helping families get on their feet in general,” said Jordan Thorpe, a PVAOR committee member.

The event is made possible by a large group of sponsors and volunteers. This year, one notable group of volunteers were from the very organization PVAOR intends to honor. Pajaro Valley Shelter’s Executive Director Kimberly Ferm was there, along with several employees.

“We scheduled a tour with some of the committee members, not knowing that was what they were thinking of,” Ferm said. “When we found out, we had no idea they were considering us.”

And to say “thank you,” the charity showed up onsite in a big way.

“We have I think 10 volunteers here from the charity, which is not something we always get,” Thorpe said. “It is always a treat to see how we are impacting them with our event.”

The year’s event was Mardi Gras themed, with more than 50 golfers taking to the green in friendly competition. The four-player scramble was held at the Spring Hills Golf Course and as golfers made their way through the 18 holes, they were met with food, drinks and snacks from a wide variety of sponsors.

“It’s good music, good people and great fun. It’s an opportunity and if you didn’t go this year, go next year,” Ferm said.

Part of the reason for this event, Thorpe said, is the desire of the group to give back and support the community that has helped benefit them.

“We are more than trying to sell you homes — we’re also a community liaison helping local businesses, local residents and local nonprofits,” he said.

The event also works as a fundraiser for PVAOR; they do not sell anything as an organization throughout the year, so the event helps keep them going. But they also hold the event to help break long-held stereotypes about realtors.

“Realtors are seen as a whole as they make a lot of money, they are very selfish,” Thorpe said. “We like to promote the idea that it is not all about the money  — we also like to get down and dirty to help a cause. Let me see what I can do for a community that has helped me.”

And, at least according to Ferm, it seems to be working.

“There’s a whole bunch of people playing golf today because of a tour that we gave and the work that we do,” she said. “We really feel honored and acknowledged and happy.”

The event closed with an awards dinner but Ferm said that supporting local charitable organizations does not have to end there.

“It takes the good work of a great group of people to help people help themselves,” she said. “We do a portion of the work of the community, and I would call to action people to find somewhere to plug in.”