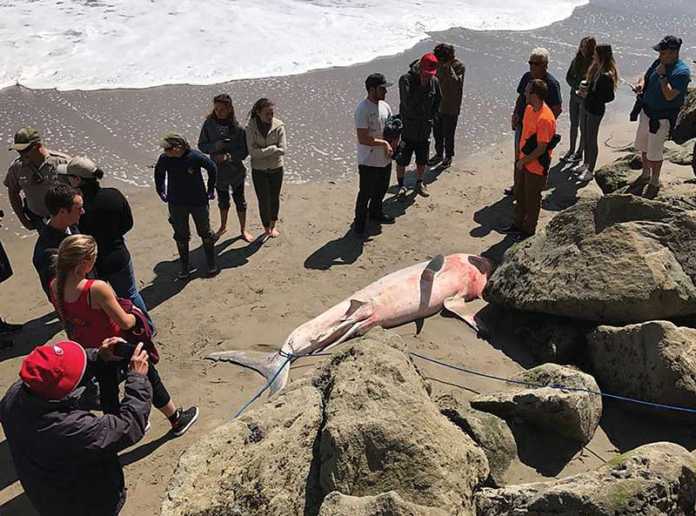 CAPITOLA — A young great white shark died after it washed ashore Friday at Pleasure Point in Capitola.
Witnesses initially called authorities to report the animal, just under 8 feet in length, struggling near the shore in the surf.

Waves eventually shoved the shark onto the shore where it died and officials tethered it by the tail to shoreline rocks. The event drew a huge crowd of curious onlookers, many snapping photos of the ocean predator.

Sean R. van Sommeran, executive director of the Santa Cruz-based Pelagic Shark Research Foundation, said it was not clear what killed the shark, which he described as about 10 years old.

“The shark was taken to a lab and we are hoping to find out the cause of the death sometime Monday,” van Sommeran said. “These kind of sharks are far more common in Southern California. It’s common for them to die due to foolish behavior like people striking them with gaff hooks; it’s senseless behavior.”

Furthermore, van Sommeran said he has recorded the deaths of more than 100 leopard sharks and rays in the San Francisco Bay recently.

“There’s just not enough being done by officials overseeing these animals, especially in protecting them,” he said. “I’m pleased that this has gone to a top level, full-on state investigation.”