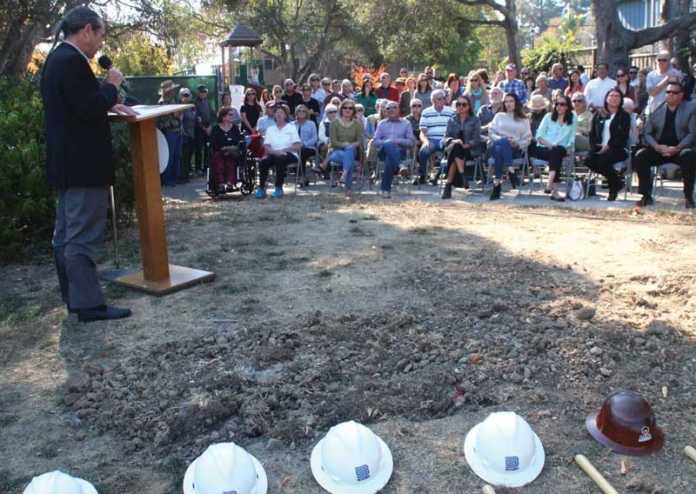 CAPITOLA — For years, a temporary building has served as the Capitola Library, which included a modest bank of computers, a colorful children’s section and an astonishing number of books, given the diminutive size of the place.

An estimated 60,000 people visit the library each year, making it one of the busiest in the county.

But the aging mobile structure was never meant to be a permanent home for the Capitola Library, and it is showing its age.

That’s set to change. Workers are expected to begin demolishing the structure on Monday to make way for the city’s new library, with construction estimated to begin on Dec. 1. It is tentatively set to open in late 2019.

In a groundbreaking ceremony Friday afternoon held to herald in the construction, Capitola Mayor Mike Termini said the project’s start was a long time coming.

“In a universe of great days, this is the greatest,” he said.

A flock of city and county officials, librarians and patrons gathered to witness the brief ceremony, which was also a chance for organizers to kick off a capital campaign to raise $750,000 still needed to cover the $13.1 million project.

The nonprofit group Friends of the Capitola Branch Library is turning to the community in hopes members will come through with the rest.  This can be accomplished by purchasing a custom-engraved paving stone, or by simply making a cash donation.

Gayle Ortiz, who sits on the fundraising committee, said that silent fundraising efforts in the run-up to the campaign has garnered $550,000 from such donors as the Ow family and Marc Monte.

The new library will weigh in at 11,700 square feet, a significant leap from the comparatively puny 4,300 square feet of the former one. When finished, it will include such amenities as a community room, an expanded children’s wing, study and reading rooms, reading “nooks,” an outdoor reading deck, a fireplace and a space for teens.

Capitola Library Branch Manager Melanee Barash said the space will also blend the traditional library model with the type of technology expected by a society that is increasingly turning to its screens instead of paper-and-glue books.

“I’m excited, it’s going to be gorgeous,” she said. “The community will be so happy. It’s going to fill a need that’s been here for a long time.”

Ortiz, who owns the eponymous Gayle’s Bakery, said she became involved with the library in 2000 after serving on the Library Ad Hoc Committee as a Capitola City Councilwoman.

That experience showed her that libraries transcend merely being places to acquire books by providing non-political gathering spaces, repositories of information and safe spaces for families of every ilk.

“I saw that people are very passionate about the library,” she said. “I don’t see how you can have a democracy without them.”

For information, or to make a donation, visit capitolalibraryfriends.org.