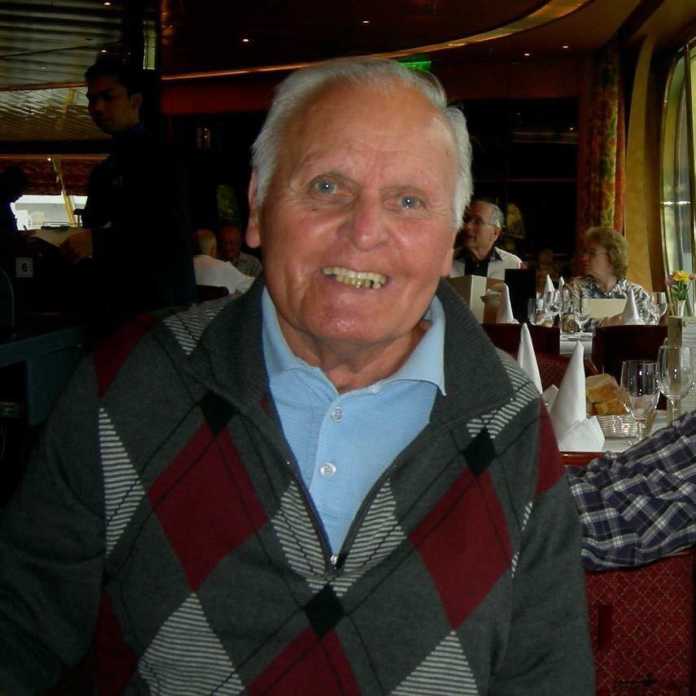 The passing of Herb Moreno, 88, on May 1, 2018 recalls to all who knew him a man with an infectious smile, generous spirit and good humor.  Herb was an inspiration to all who knew him, no more so than after a debilitating stroke in 1994.  In the most difficult of times, Herb maintained his unique humor, resilience, and a positive attitude.  He lived a long and full life: an athlete in his early years, a businessman for 40 years, and an avid traveler in later years.  Herb passed away peacefully at home after a short illness.

The son of Trancito & Luciana Matcham Moreno, Herb was born in Montibello in Los Angeles County on January 26, 1930.  In his early years the family moved to Kingsburg where they were grape ranchers and Herb became a star high school athlete.  After service in the U.S. Navy (where he played basketball) he was then a semi-pro baseball player for 10 years with the Cleveland Indians, Sunset League (fans knew him as “Chico”), and Coos Bay League in Oregon. He married high school sweetheart Phyllis Moulthrop and started a family, living on the Oregon coast in Bandon.  Returning to California in 1960, Herb was manager of Standard Oil’s Watsonville bulk plant, and in 1970 he and Phyllis purchased the Phillips Petroleum Company on Associated Lane in Pajaro, which later became Moreno Petroleum.   A 40-year entrepreneur, Herb enjoyed his associations with Pajaro Valley growers, the Lion’s Club, and the Watsonville community.  Always an athlete, Herb played in the Watsonville City Basketball League in the 60s, and was a charter member of the Tennis Club of Rio Del Mar where he met Merlyn Aronvici. They were married in 1986 and enjoyed playing mixed doubles in senior tournaments statewide. When Herb had a debilitating stroke in 1994, his sports activities ended, but his travel spirit did not!   Together Herb & Merlyn drove several times across the country, and in several Canadian provinces and northern Mexico in their 34’ motor home.  Merlyn was driver with Herb as co-pilot; his navigational skills were questionable but they survived to have wonderful memories! In the 24 years since Herb’s stroke he had been a student and advocate of the fine program at Cabrillo College Stroke & Disability Center where his life was enriched greatly with excellent classes and camaraderie with great friends!

Our sincere thanks go out to the Visiting Angels of Santa Cruz and Santa Cruz Hospice for their compassionate care-giving support.  Herb and Merlyn were aided throughout Herb’s 24-year journey living with a major disability by many wonderful caregivers, therapists and organizations, as well as doctors Chandra, Quinn and others.  Memorial donations may be made to the Dominican Hospital Acute Rehabilitation Unit, Dignity Home Health, Cabrillo College Stroke & Disability Center, and Hospice of Santa Cruz.  A celebration for friends and family will be held in Herb’s honor at a later date. Mehl’s Colonial Chapel was entrusted with the arrangements.