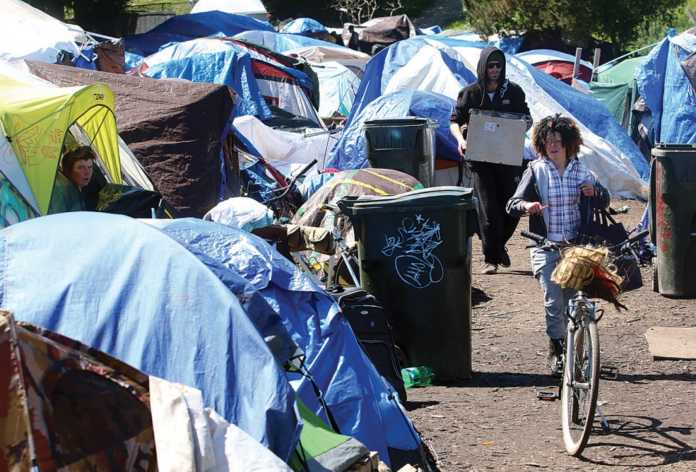 SANTA CRUZ — A group of homeless advocates plan to sue the City of Santa Cruz after a federal judge dismissed a lawsuit stemming from the May 3 closure of the Ross Camp.

He said the decision stemmed from an earlier warning to the plaintiffs to submit paperwork by Aug. 30.

When they didn’t, the case was “dismissed for failure to prosecute,” the Ninth Circuit Court stated.

Ross Camp was a conglomeration of tents and ramshackle lean-tos, and served for six months as an unsanctioned home for about 200 people on the San Lorenzo River levee near downtown.

In the lawsuit, a group of 10 people living at the camp alleged several civil rights violations against the homeless community as the city sought to close the camp.

At the heart of the plaintiffs’ allegations was that the city had no alternative place for the camp residents to go, and that “irreparable harm” would follow as the residents spread elsewhere into the city.

Ater a protracted court battle, Davila rescinded a restraining order that prevented the city from shuttering the camp, stating that the plaintiffs did not prove their claims of harm stemming from the closure. He also said that the city outlined several places where the displaced residents could go.

The plaintiffs immediately appealed the ruling, which was tossed out in the Sept. 11 decision.

Kuhl said she was not surprised by the dismissal.

“We did miss a filing deadline,” she said.

But the lawsuit was largely moot, she said, because the camp has been closed for nearly five months.

“Our case was almost entirely about the closure of Ross Camp,” she said.

The new lawsuit will focus on the harm now being suffered by the displaced residents, despite the city’s promise that they would receive alternative shelter.

This includes a lack of restrooms for homeless people, Kuhl said. They also receive numerous trespassing tickets, and are frequently harassed and assaulted, Kuhl said.

“Basically they have nowhere to go,” she said.

Kuhl pointed to a recent decision by the city to impose a curfew on Main Beach, where several homeless people had been camping.

“We’re really disappointed and sad that the judge trusted the city,” she said. “The city was dishonest, and people are camping all over. We’re preparing evidence to show that the people are still displaced, and that they are still facing harm.”

Kuhl said that the city did not respond to plaintiffs’ requests for such necessities as shower facilities, and hotel and laundry vouchers.

“We were asking the city to be very reasonable, and the city attorney wasn’t even willing to meet with us,” she said. “It’s their fault that they are heading to a lawsuit.”