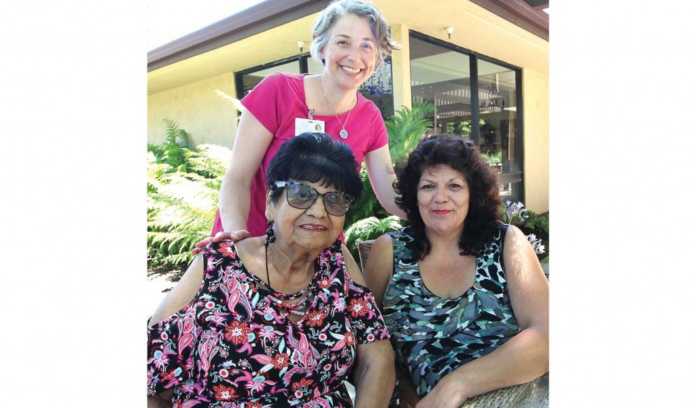 WATSONVILLE — As a fiercely independent woman, no one knew Lupe Barcelo had a stroke in 2016 until a day or so after.

While in the hospital, Barcelo was put on hospice care. Yet, she recovered so quickly that she was transferred to palliative care, and returned home.

Now, two years later, Barcelo lives with one of her daughters, Vicky Barcelo, in Watsonville, and together the two take part in the palliative care services offered by Hospice of Santa Cruz County.

The program, which moved from a pilot in 2016 to an ongoing service provided by Hospice last year, features home visits by a care team that includes a physician, nurse, social worker and chaplain. The team provides pain and symptom management, psychosocial support, advance care planning, disease management education, spiritual counseling and other services for patients, families and caregivers.

Palliative care is specialized medical care for people with serious illness. It is for those who are not ready for hospice care, which is reserved for people who have six months or less to live.

On Monday afternoon, Barcelo received a visit from Samara Gruyé, a social worker with the palliative care program. After each visit, Gruyé relays Barcelo’s status to her doctor.

Vicky Barcelo said her mother has stayed out of the hospital since she began receiving services from the palliative care team.

“I believe that’s all due to the care she receives,” she said.

Vicky Barcelo added that, as her mother’s caregiver, the program gives her reassurance that she is taking care of her mother properly.

“It’s a great program,” she said. “It really makes a difference. I’m always reassured that I’m doing everything right.”

Hospice of Santa Cruz County CEO Mike Milward said that is one of the goals of the program: to keep people out of the emergency room.

“We realized there was a real need to take care of people before they were ready for hospice,” he said. “Our palliative care program allows them to experience a hospice-like experience and allows them to be cared for in their home.”

Since the program started in January 2016, it has served 356 patients, according to Chief Strategy Officer Kieran Shah, including 163 last year.

The organization recently announced that it has partnered with Blue Shield of California to make the program available to patients enrolled in Blue Shield’s health plans including individual, group and Medicare members.

After a successful pilot and launch, Hospice of Santa Cruz County is now hoping to spread the word to other families who share a similar situation as the Barcelos.

“If people think that someone they know or love can benefit from our services, they should call us to help them understand how we might be of service,” Milward said.