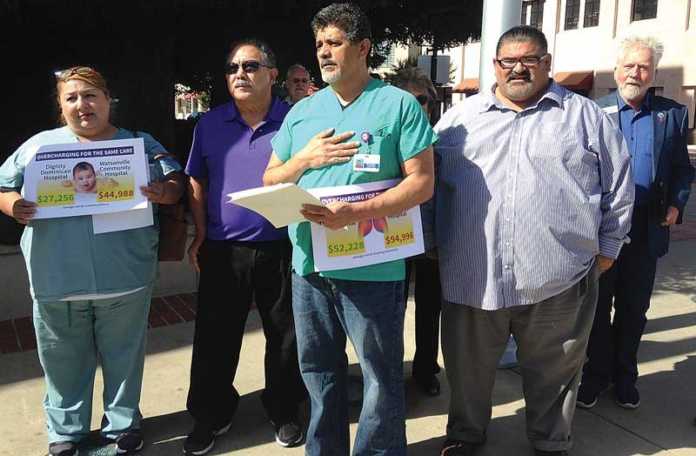 The so-called Watsonville Accountable and Affordable Health Care Initiative was introduced in October by a group of Watsonville healthcare workers.

Surgical tech Chris Gil said the initiative was created to rein in what supporters say is overcharging by the hospital.

According to Gil, WCH charges on average about 40 percent more than Dominican Hospital does for procedures.

Patients in Watsonville pay about $45,000 for a routine baby delivery, compared to a little more than $27,000 at Dominican, according to the California Office of Statewide Health Planning and Development.

That agency also reports that treatment for a kidney infection at WCH costs more than $80,000, and about $54,000 at Dominican.

Organizers must now collect 1,791 signatures for the measure to qualify for the Nov. 6, 2018 election.

It would then require a simple majority to pass.

If voters approve it, WCH would not be able to charge more than 15 percent over what is considered the “reasonable cost of direct patient care.”

In the initiative, “reasonable” is defined as the costs directly associated with operating a medical facility, and providing care to patients.

The initiative would also require the hospital to refund patients who are charged over that amount, and to keep track of all its patient charges.

The rules would also stack a 5 percent fine on the rebates that are owed to 50 or fewer people, and 10 percent if owed to more than 50.

Watsonville Community Hospital officials did not immediately respond to a call for comment.

In a prepared statement in October, however, WCH spokeswoman Cindy Weigelt said the corporation is “profoundly disappointed” by the initiative.

In the letter, Kirschner suggested that following the local ordinance could put WCH at odds with state and federal health care regulations. In addition, the initiative imposes financial restrictions without regard to preexisting contracts between the hospital and its providers, Kirschner said.

To read the initiative, visit tinyurl.com/ycb7swwd.