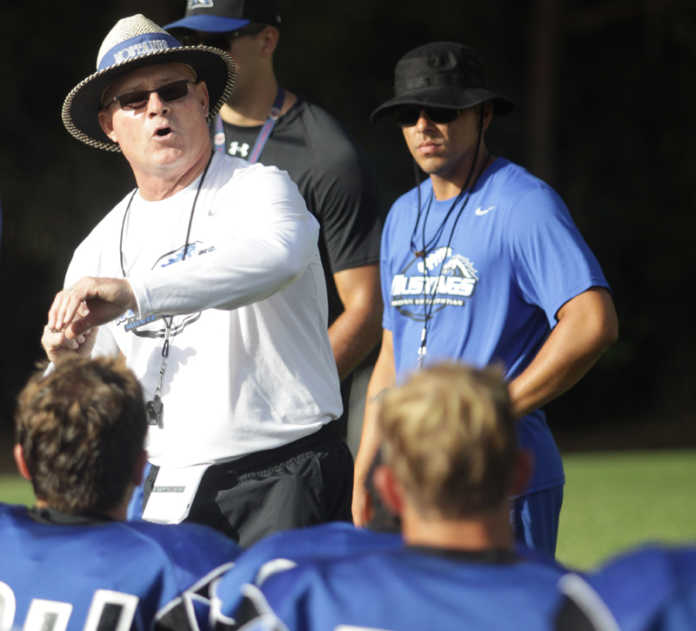 WATSONVILLE — David Reese, the man responsible for turning the Monte Vista Christian football program into a consistent league and section title contender, recently turned in his letter of resignation after spending the last nine years as the school’s football coach and Athletic Director.

“I just felt like it was time,” said Reese, who will continue at the Watsonville-based private school until his contract expires in June. “New headmaster. New ideas. New changes. It’s a perfect time. Well, there’s never a perfect time but it’s a good time. The right time. I’m a Mustang. I’ve had nine amazing years here. I love the school. Love the kids. It was just the right time.”

MVC headmaster Steve Sharp, who hired Reese away from Grace Prep Academy in Arlington, Texas, is also set to retire at the end of the school year. He will be replaced by headmaster-elect Mitchell Salerno.

Reese said he was given the opportunity to extend his contract but after praying and talking to his wife, Leslye, he decided to wrap up his time in Watsonville and make the move back to Texas, where the majority of his family, including his grandkids and his oldest son, David, lives.

In an email sent to parents of the MVC athletes, Salerno wrote that the administration was “thankful” to Reese for his nine years of service and that the school’s search for his replacement would be vast and thorough.

“Under his leadership,” Salerno wrote, “the MVC athletic program and football team have reached new heights.”

Reese inherited a football program that had just four winning seasons and one Central Coast Section playoff appearance and turned it into a powerhouse. He had six winning seasons and five CCS postseason berths, while posting a 63-36 record. The Mustangs won a league title in 2011 and played for a CCS Division IV championship in 2014.

“I’m proud of everything we accomplished here,” Reese said. “The only thing we didn’t do was win a CCS title. Obviously, that’s what we all want to do. We got close…I’m proud that I’m leaving the program in a better place than when I inherited it. I was looking at our schedule for this coming year and comparing it to the first year I got here and it’s not even close. When I first got here, if I would’ve said we’re playing Palma, San Benito, Aptos and all these other teams people would’ve said, ‘we’ll we’re not having a football season.’ We’re at that level now.”

Reese was one of just two football coaches in Santa Cruz County to also work as the school’s A.D. last season — Scotts Valley High’s Louie Walters being the other. It usually meant late nights or long drives to meet his duties as an administrator.

At times, Reese even filled in for some of his coaches in a pinch. He coached the baseball team to a win during his first year at MVC, coached the soccer team through three games and is the current head coach of the track and field team.

“Baseball wasn’t a problem, that’s my second passion,” Reese said. “Soccer and track, well, that was a different story. I’ve learned a lot about those two sports over the years.”

The following year — with quarterback Taylor Cohan, the MBL Offensive Player of the Year, and defensive back Josh Mooney, the MBL Special Teams Player of the Year, leading the team — the Mustangs went 10-2, won a share of the MBL title and advanced to the CCS D-IV semifinals.

Reese said that was a crucial year that let him know his methods were finally working.

“If we wouldn’t have turned the corner, I don’t know if I would’ve made a fourth year,” Reese said. “I’ve said it before, I would’ve fired myself.”

Reese really put MVC on the map during the 2014 season. The Mustangs — powered by a star-studded roster, including Ryan De Los Santos, D’Shawn Hopkins and Christian Rebottaro — went 10-3 and advanced to the program’s first CCS title game.

Reese said that by that point, the culture that he was trying to create was well-ingrained into the program and that it would live on without him.

“We’re not that team that you schedule on your homecoming anymore,” Reese said. “We were that team when we got here. A lot of teams liked us. They were happy to play us. Now teams see us and they don’t like us. It’s not a bad thing when teams don’t like you anymore.”