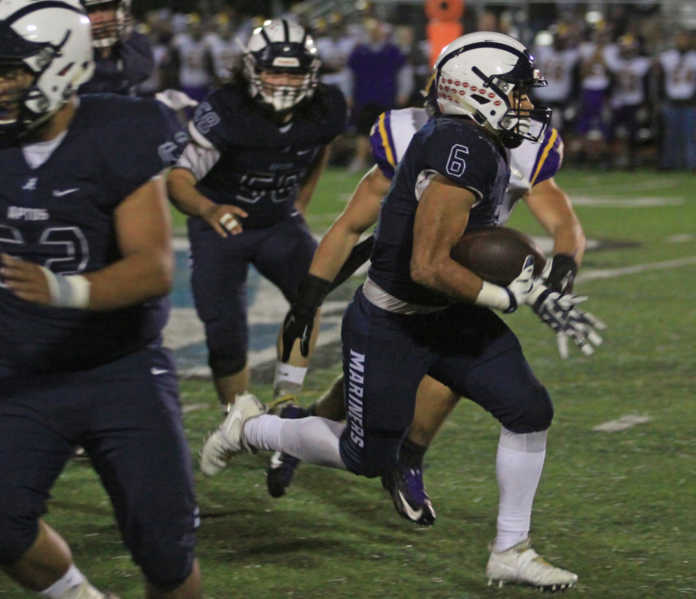 The Watsonville High Wildcatz have plenty of momentum after last week’s win over the rival Pajaro Valley High Grizzlies. They’ll need all of that confidence and even more in order to pull off what would be a massive upset of the undefeated Gilroy High Mustangs on Thursday night.

Ranked 281st in the state and 18th in the Central Coast Section by MaxPreps.com, Gilroy (9-0, 5-0) enters with a share of the Monterey Bay League Pacific division championship already clinched and the outright title a win away.

The league title was the Mustangs’ first since 2008.

Thursday’s meeting will be a make-up game for a contest originally scheduled for Oct. 13 but postponed because of poor air quality stemming from the fires in Northern California.

The Mustangs, coached by Jubenal Rodriguez, have dominated the MBL-P this season, winning their five games by an average of 30.8 points and scoring 42 points or more in their last three.

Junior running back Joseph Barnes has been the bell cow for Gilroy, rushing for 15 touchdowns and catching three scores, too. Senior Christian Rodriguez has also been a force on the ground. He’s rushed for eight touchdowns and totaled more than 600 yards this season.

Coached by Ron Myers, Watsonville (6-3, 3-2) has not beaten Gilroy since 1997, losing to the Mustangs in nine straight meetings, including the last four years. Watsonville lost 48-13 last season.

Almost everything went right for the Wildcatz in their 30-0 win over Pajaro Valley in the 11th annual Belgard Kup Game. Junior defensive back James Sandoval played some offense and showed off his wheels by scoring twice. Senior running back Evan Delozier scored his 13th rushing touchdown of the season and senior quarterback Isaac Baltazar also ran for a score.

Watsonville, which has already clinched the program’s first winning record since 2009, will need everything to go as planned offensively and they will also need to force Gilroy into mistakes on defense if the Wildcatz wish to pull off the upset and boost their playoff resume.

Here’s a look at the rest of the local football action happening Friday:

• Aptos vs. Alvarez, Thursday at 7:30 p.m. — Their win streak against league opponents is gone and so are their hopes of a MBL-Gabilan division title. But the Aptos High Mariners still have plenty of football left to be played.

Thursday night’s make-up game against Alvarez High will be the first on the docket.

The Eagles (3-6, 1-5), coached by Brad Mendes, snapped a six-game losing streak last week with a win against North Salinas High.

Ranked 189th in the state and 10th in the CCS by MaxPreps.com, Aptos’ heartbreaking loss last week to Salinas High stopped their winning streak against league opponents at 37 games and locked them into a second-place finish in the MBL-Gabilan division.

The Mariners (6-3, 5-1) will not win their seventh straight league championship this season but they will make their eighth straight playoff appearance. They are also set up nicely in the CCS Division III projections and have a solid chance of advancing to their fifth section championship game in the last six years.

Before last week’s win, the Eagles had scored more than 12 points in only one league game. They’ve been shutout three times this season.

The Mariners’ defense, led by junior Marcos Reyes and seniors Blake Wheeler and Desmond Mendoza, will look to bounce back this week after giving up more than 30 points for the first time this season.

Coached by Randy Blankenship, Aptos also showcased sophomore running back Vaughn Holland last week, as the speedster rushed around on a sweep for a 28-yard touchdown.

The Mariners might also see the return of junior defensive back and running back Bubba Gallardo, who has missed the last two games with a concussion.

• St. Francis vs. Soquel (at Watsonville High), Friday at 7:30 p.m. — St. Francis High’s league championship hopes are still alive and they also still have a chance of making the CCS playoffs, too, although the latter is very unlikely.

With a win on Friday night, the Sharks (7-2, 4-1), coached by John Ausman, would clinch a share of the Mission Trail Athletic League Coastal division championship. A win, however, would not automatically send them to the postseason.

St. Francis would need Santa Cruz High, which owns a head-to-head tiebreaker over the Sharks for the division’s lone automatic playoff berth, to lose to Harbor High on Friday night.

Coached by Brad Tompkins, the Knights (4-5, 2-3) started off league play with back-to-back wins but have lost their last three and have allowed 50 points or more in each of the last two weeks.

That bodes well for St. Francis, which needs a bounce back game from its offense after being held to its lowest point total (14) since its Sept. 8 game in Oregon against La Salle.

Carson Cuzick led the charge with 90 yards rushing and a touchdown on 23 carries in last week’s loss but the Sharks’ offense was otherwise kept in check.

St. Francis has not beat Soquel since 2010, losing four straight games to the Knights over the past six seasons.

A St. Francis win would also set the program’s record for wins in a single season.