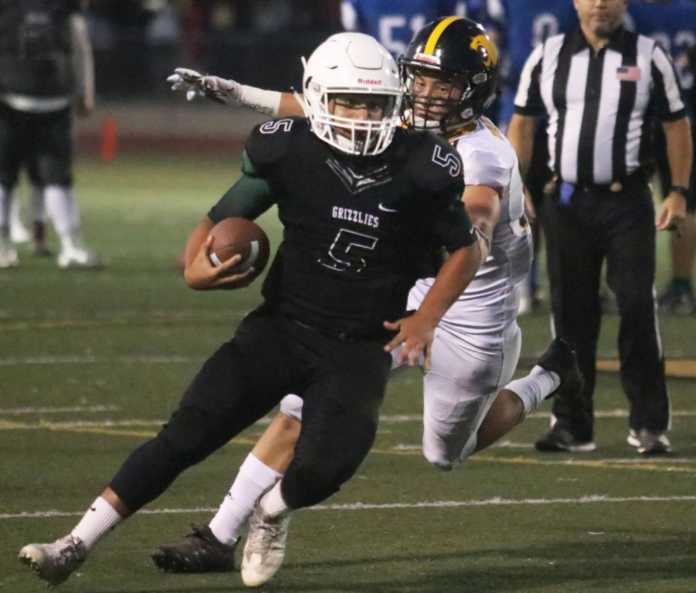 It will be the 12th edition of the annual rivalry football game.

Watsonville, coached by Ron Myers, holds a 9-2 advantage in the rivalry, and a 10-2 all-time record against its cross-city rival — the first meeting between the two public schools was not a part of the Belgard Kup Game series.

The Kup has changed hands three times since 2013, a year in which Pajaro Valley notched its first victory over Watsonville. The Wildcatz last season shut out the Grizzlies, 30-0, to avenge their 3-0 loss from 2016.

The game was moved up to the first week of the season because the two squads are now in separate divisions of the newly-formed Pacific Coast Athletic League. Watsonville now plays in the Mission division and Pajaro Valley, coached by Kevin Cordova,  competes in the Santa Lucia division.

Watsonville showcased its plethora of backs, including senior Matthew Barcelo, who was carrying piles of Pajaro Valley defenders on his runs. The Wildcatz’s offensive and defensive lines also played well, showing their added beef up front.

The Grizzlies, meanwhile, flaunted their balanced offensive attack with senior quarterback Max Arevalo, who delivered some nice passes in the short and deep areas of the field. Senior running back Russel Pablo also had a nice night, running behind an experienced offensive line.

Here’s a look at the other high school football games this week:

Christopher, a Central Coast Section Division IV champion last season, is one of three tough opponents the Mustangs will face to open up the Jubenal Rodriguez era. They travel to The King’s Academy next week and close out their preseason the following week at Aptos High.

The Mustangs will debut a new quarterback in junior Nate Renggli, who looked poised at last week’s Apple City Jamboree. Junior running back Quinn Alexander is also expected to make his first varsity start tonight. The two will try to replace the duo of Sean White and Cody Paresa, whom accounted for 30 touchdowns last season.

M.V.C.’s defense should be tested plenty, as Christopher, coached by Tim Pierleoni, returns nearly every starter from an offense that last year averaged 34.5 points per game. Senior quarterback Ben Sanford, senior tight end Jason Scirigione and senior receiver Joseph Cupp will make life difficult through the air, while senior running back Tyler Davis, who rushed for 1,182 yards and 11 scores last season, will power the running game.

• Aptos at Templeton; today at 7:30 p.m.: In a rematch of last year’s opener, Aptos High will travel down to Templeton High to face the Eagles tonight.

The Mariners, coached by Randy Blankenship, last year thumped the Eagles, coached by Tyler Lane, 58-12, behind their rushing attack. They totaled 418 yards and six scores on the ground.

Senior running back Marcos Reyes, who last season ran for 132 yards and two touchdowns on just eight carries, will try to inch closer to the program’s career rushing record — he is just 332 yards shy of the record (2,082).

There might be a little bit of an adjustment period for the guys in front of Reyes, as only two starting offensive linemen return from last season group.

Aptos has won its season opener each of the last four years.

Templeton, a member of the newly-formed Central Coast Athletic Association’s Ocean division in the Central Section, is three years removed from its last winning season.

• St. Francis vs Sobrato (at Santa Cruz High), Today at 7:30 p.m.: The second season of the John Ausman era at St. Francis High will begin tonight in Santa Cruz against Sobrato High.

The Sharks have won their last two season openers, but will have to work extremely hard to push that streak to three. Sobrato, coached by Tony Holmes, is fresh off an 8-3 season in which it won the Blossom Valley Athletic League West Valley division championship.

Several members of that team are back this fall. Senior runners Devin McLeod, Abel Martinez, Andy O’Rourke and Andrew Seymour return with an entire year of varsity football under their belts. That quartet impressed at last week’s Apple City Jamboree, as Seymour ripped off a few big runs, including one for a touchdown that featured an ankle-breaking juke in the open field.

The Bulldogs, meanwhile, have just four seniors on their roster, according to MaxPreps.com, and do not return any of their statistical leaders. They do return captain Jonathan Sheets, who last season had 13 tackles for loss and six sacks.

• Editor’s Note: North Monterey County High played against North Salinas High in its season opener on Thursday night. The results of that game were not available before print. For results, visit pajaronian.com.

REGISTER-PAJARONIAN STAFF REPORT - June 21, 2022
In the fall of 2013, Cabrillo College celebrated the opening of a remodeled and expanded Science, Technology, Engineering and Math (STEM) center in Aptos. After...