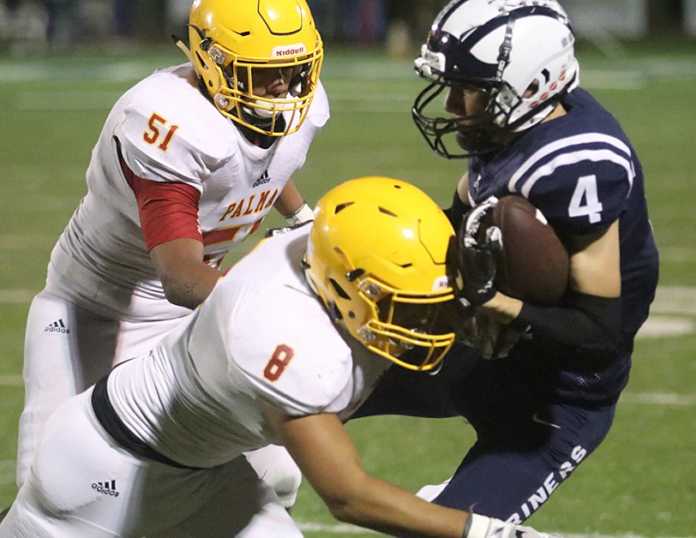 By: TONY NUNEZ
October 27, 2018
750
0
APTOS — The final week of Pacific Coast Athletic League Gabilan division play will be a fun one.

Aptos, Palma, San Benito and Salinas will all have a chance to win a share of the league title after a pair of wild finishes between the four powerhouses of the Monterey Bay on Friday night.

The Chieftains withstood the Mariners’ late rally for a 40-35 win in Aptos, and the Haybalers did the same against the Cowboys in Salinas for a 35-28 victory.

Who those teams will be is anyone’s guess.

“We win next week, we’re co-champions,” said Aptos head coach Randy Blankenship. “This one hurt a lot, but if these guys have the fight I think they do, they’ll come back and do it.”

The Mariners were visibly upset after letting Friday’s heartbreaker slip away. Mostly because of how close they came to securing the title-clinching win.

After blowing a pair of leads in the second half, Aptos managed to come within five yards of the game-winning touchdown. But Palma’s defense made its stand on the final play of the game, stopping the Mariners at the 1-yard line to knock them from the ranks of the unbeaten and cause a logjam atop the PCAL-G.

Aptos senior running back Marcos Reyes drew “feed-the-beast” chants as he rushed 26 times for 204 yards and four touchdowns, three of which helped the Mariners take a 21-14 lead into halftime.

Junior fullback Josh Powell added 102 yards rushing on 20 carries, and senior quarterback Hunter Matys made plays with his legs, too, totaling 56 yards and a touchdown on nine totes.

Aptos finished with 435 yards rushing as a team.

The signal caller diced up the Mariners’ secondary by completing 13 of 20 passing attempts for 315 yards and five touchdowns, including his 68-yard connection with junior receiver Jon Jon Berring that stood as the game-winner.

“We were hitting the middle of the field the whole game,” Sergent said of the final touchdown pass. “I thought they were going to cover it, but [Berring] used his speed and got open.”

Berring finished with four receptions for 126 yards and two touchdowns. He also rushed for a 10-yard score in the first half.

Senior receiver Marco Pezzini also had a big day out wide, hauling in four passes for 138 yards and three touchdowns.

Pezzini’s 61-yard touchdown reception at the 7:13-mark of the fourth quarter gave Palma its first lead of the game, 34-28.

But Aptos marched down the field on a 10-play drive to retake the lead on Matys’ 22-yard sprint into the end zone with 3:24 left.

The Mariners forced the Chieftains into fourth down on the ensuring drive, but Sergent stunned the raucous senior night crowd by hitting Berring with a strike over the middle of the field and the speedy receiver did the rest.

Aptos pieced together a 15-play drive over the final 2:12, but a pitch to Reyes was stopped a yard short of the goal line and the Chieftains’ sideline stormed Trevin Dilfer Field in jubilation.

Palma’s defense gave up 494 yards of offense, but made plays when it needed to.

Brent Eastman’s interception set up Berring’s game-tying 31-yard touchdown reception late in the third quarter, and the defense also made a key goal line stand early in the fourth to keep the game tied heading into the final stretch.

The Aptos defense had allowed only 74 points all season before Friday night, but it could not keep a lid on Palma’s explosive attack.

Junior running back Anthony Villegas also had a good day against the Mariners’ normally stout defensive front. He carried 23 times for 126 yards, 86 of which came as Aptos scrambled to stop Sergent and the Palma passing game over the final two quarters.

“We just have to learn from our mistakes and not make them next week and the following weeks,” Matys said.

M.V.C. (4-5, 4-1), which has locked up one of the division’s three automatic Central Coast Section playoff berths, will close out the regular season at Watsonville next week.

WATSONVILLE—Watsonville High senior Josh Rocha stood on the sidelines with 40 seconds left in the game, watching every second tick away until the scoreboard...
Read more
Sports

TONY NUNEZ - April 16, 2021
WATSONVILLE—After a year of being shuttered, Pajaro Valley Arts (PVA) has once again fully opened its gallery to the public. On April 9, the organization...