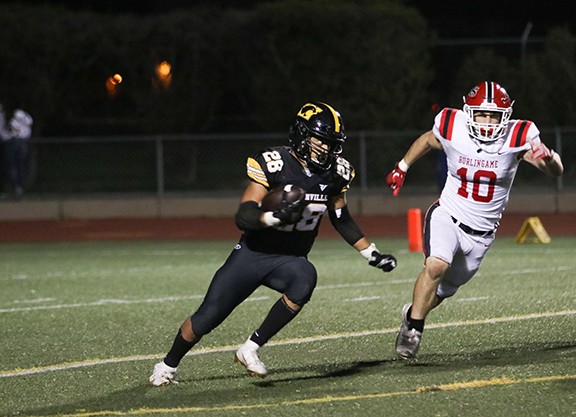 WATSONVILLE — The Watsonville High football team had two weeks to prepare for its preseason finale against Burlingame High.

Yet, the Wildcatz on Friday came out flat in a 42-0 loss to the Panthers in non-league action.

Watsonville was held to 143 total yards — 81 rushing and 62 passing — and fumbled the ball once, failing to get anything going on offensively.

Senior running back Blake Mares had a team-high 45 rushing yards on 11 carries for the Wildcatz.

Burlingame junior running back Lucas Meredith finished with a game high 155 rushing yards and two touchdowns on 14 carries. He also had a reception for 15 yards.

The Panthers racked up 189 rushing yards on 33 carries as a team.

Burlingame senior quarterback Jordan Malahus was nearly perfect as he completed 9-of-10 pass attempts for 153 yards and a touchdown.

Burlingame coach John Philipopoulos said he thought they played well especially after coming off two losses that he believes should’ve been wins.

“We really coached up our pad level, especially playing these guys,” Philipopoulos said. “They’re really big and really down hill. They run the offense that we had trouble with the week before.”

Philipopoulos mentioned Friday night’s game was all about taking on the double teams, being physical and going through blocks, not around them.

“We’re learning, growing and getting better,” Philipopoulos said. “It’s like we told our kids, ‘this is not the end all, be all. This is the first building block.”

Malahus connected with senior tight end Taylor Clark early in the first quarter with a 64-yard touchdown pass to take a 7-0 lead.

Malahus followed that up with another touchdown pass, this time a 4-yard strike to senior tight end Joe Schenone.

Meredith extended the lead by 28 as he scored a pair of touchdowns in the second quarter, including a 95-yard sprint into the end zone with 3:03 left in the first half.

“I got the ball, juggled it a bit, and I just made one cut. I saw the defender and shook him a little bit and saw real estate and just kept going,” Meredith said.

Malahus threw his third touchdown of the half when he found Clark once again for a 1-yard strike just before halftime.

The Wildcatz received the ball in the second half and the offense continued to struggle as the Panthers’ defense forced Watsonville to punt.

Burlingame capitalized with a 9-play, 85-yard drive that was capped off with a touchdown by sophomore running back Elijah La Guardia.

“We needed this, this was us flipping the switch,” Meredith said. “We fought for it, we got it and we’re enjoying it now.”

The Panthers defense held on to the shutout and did not allow the Wildcatz to have any red zone opportunities.

“Watsonville’s a very physical team, we just had the upper hand,” Meredith said. “We locked down on defense. We watched a lot of film and put in a lot of hard work these past two weeks.”

The Wildcatz took a big punch in the first half but Myers said he liked the way the players adjusted after halftime. He said they responded well and got their focus back.

“They didn’t quit and they battled back and they stayed in the fight,” Myers said.

Junior Nasser Sabla finished with 33 yards on nine carries and Alex Aelazquez had 18 yards on eight carries for the Wildcatz.

It’s the second straight loss against Burlingame, the defending Central Coast Section Division IV champion. However, Myers said playing teams such as the Panthers and others ranked higher than Watsonville is important for them.

“I think we’re going to grow more from this,” Myers said.

“We got North County coming in here next week,” Myers said. “And so what do we take from this?… Hopefully by now we should know what our strengths and our weaknesses are.”

THE SCORE
Burlingame 42, at Watsonville 0