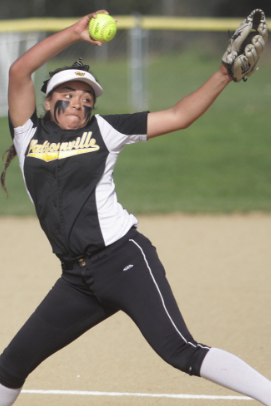 WATSONVILLE — In softball, the pitcher-catcher relationship is thought to be one of the major determining factors between a team’s success and failure.

If true, the Watsonville Wildcatz are set up nicely for this season and the near future.

Pitcher Jessica Rodriguez and catcher Juliana Wilson, both sophomores, have been in the same school since preschool, have played on the same softball team since they were 9 and committed to Division I college programs just months away from one another.

They’re inseparable, spending more time together than with their own family some weeks. They share a smile when Rodriguez leaves an opposing batter whiffing at air and Wilson knows the right words to say to calm her buddy down in tense moments.

Most of the time, one can predict what the other is going to say or do.

“It’s funny,” Wilson said. “Even when I break out into some random dance, she’ll start dancing the same exact way. It happens so often.”

Muy bueno, as far as the Wildcatz are concerned.

If Watsonville is to compete in the Monterey Bay League Gabilan division, arguably the toughest league in the entire Central Coast Section, the duo will have to play up to their potential and then some.

Second place Notre Dame-Salinas, which has won all 11 of its preseason games, including a 4-0 victory over reigning CCS D-II champ Archbishop Mitty, also returns plenty, including the MBL-G’s Pitcher of the Year Vanessa Gonzalez.

Christopher, which finished fourth last season, is 8-1 in the preseason and blanked CCS D-II runner-up Pioneer, 16-0, on Thursday.

Oh, and North Salinas and Monterey have a combined 10-2 preseason record.

“It’s crazy,” said Watsonville third-year head coach Scott Wilson, Juliana’s father. “There’s no break. The good thing is we’ve played some of these teams last year and they’re not going to walk in like, ‘oh my god.’ I think we’re going to compete.”

Watsonville took time during its second consecutive MBL-Pacific division title run to play a handful of games against Gabilan teams. The results were so-so, as the Wildcatz lost all five games to ND-Salinas, Gilroy, Christopher, San Benito and Monterey. Still, Juliana Wilson said the experience was invaluable.

“We know what to expect,” said the future University of Central Florida Knight. “It’s going to be tough. All of those teams are good.”

The Pacific division’s Most Valuable Player as a freshman, Wilson has picked up right where she left off. Through six games, the 5-foot-7 power hitter with a slingshot of an arm behind the plate is batting .500 and has 11 RBIs with four doubles and a homer.

She’s in the heart of the lineup with senior outfielder Liyah Lopez — a MBL-P Second Team selection last season — and Rodriguez, who is also hitting .500.

Coach Wilson said he’s still deliberating who the Wildcatz’s lead-off hitter will be heading into league play. He has experimented with juniors Zaira Pena and Savanah Quintana and senior Nicole Wilson, his oldest daughter. All three have their strengths. Pena leads the team in hits (13), Quintana leads the team in batting average (.625) and Wilson’s on-base plus slugging percentage (1.336) is second only to her sister. As far as coach Wilson is concerned, it’s not a bad problem to have.

And Rodriguez isn’t too shabby either in the circle.

Through six games the University of Nevada, Las Vegas commit has held a gaudy 0.68 earned run average (ERA) and recorded 59 strikeouts. She throws a rise, drop, change-up and curve, which she says is her go-to pitch.

Rodriguez made seven starts and recorded five wins as a freshman to help the Wildcatz make their second straight CCS playoff appearance.

“We shouldn’t be comfortable with what we’ve done,” Rodriguez said of her successful first campaign. “We need to keep this going into this season.”

Watsonville has also gotten a nice boost from freshmen outfielders Angelina Heredia and Jazmyn Martinez, who have combined for 15 RBIs, four doubles and a home run.

“They’re a big shot in the arm for us,” coach Wilson said. “They’ve stepped in nicely.”

The Wildcatz had plenty of time to let last year’s first-round exit from the CCS playoffs soak in but have not discussed it much. They all simply agree that they can do much better this season.

“I think that’s the elephant in the room,” Lopez said. “We haven’t really talked about it but I think we all want to get back to CCS and go further.”

To guarantee a CCS playoff spot, they’ll need to finish in the top four of the MBL-G.

Watsonville begins league play on Tuesday at home against Monterey at 4:30 p.m.

“I hope we can show up,” Rodriguez said. “That we can show people Watsonville softball is doing big things.”

With only one senior, centerfielder Rachel Vanni, Monte Vista Christian is very young but should be a major threat for the Pacific division title.

Sophomore pitcher Gianna Vanni, sophomore third baseman Holly Finn and junior first baseman Mariah Gonzalez lead the youthful Mustangs from the middle of the lineup with their bats and their voices. The three have combined for 30 RBIs, seven doubles, three triples and two homers.

Vanni has also thrown well this season, recording 68 strikeouts in 47 and 2-3 innings of work.

Behind her, sophomore Sammantha Baer and freshman Drew Barragan can also step into the circle and toss a few innings.

Barragan is one of four difference-making freshman Scally has been blessed with this season.

Right fielder Jessica Enriquez bats lead-off and has a cannon of an arm, shortstop Marissa Angulo is tough and fearless with a great amount of athleticism and level-headed Kendal McPhillips will play left field.

“I feel really good about the chemistry of this team,” said Scally, adding that much-improved junior catcher Sarah Kashani is the glue of the team. “We had good chemistry last season but this season it seems different.”

The Condors also seem like contenders with freshman shortstop Victoria Cardoza, who already has five multi-hit games, leading the charge.

MVC, NMC and Pajaro Valley will also see Alisal, Alvarez, Seaside and Salinas, which moved down from the Gabilan, in MBL-P play this season.

Both the Aptos Mariners and the St. Francis Sharks have had their fair share of struggles through the preseason but will look to rebound Tuesday when Santa Cruz Coast Athletic League play starts.

The Mariners finished second behind league champ Scotts Valley last year but have not been the same without seniors Jennifer Segura and Kate Jeffery, dropping five straight to start the season. Segura was the SCCAL co-MVP and Jeffery earned a spot on the First Team.

So far, sophomore pitcher/infielder Julia Cano has been a constant for the Mariners. She has a .455 batting average with three RBIs, two doubles and two triples.

The Sharks are very young with only three seniors and 10 underclassmen.

Senior pitcher Miranda Janisch, who earned a SCCAL Second Team selection, and sophomore Lena Ciandro lead the way for St. Francis, which opens its season on Thursday at Soquel at 4 p.m.