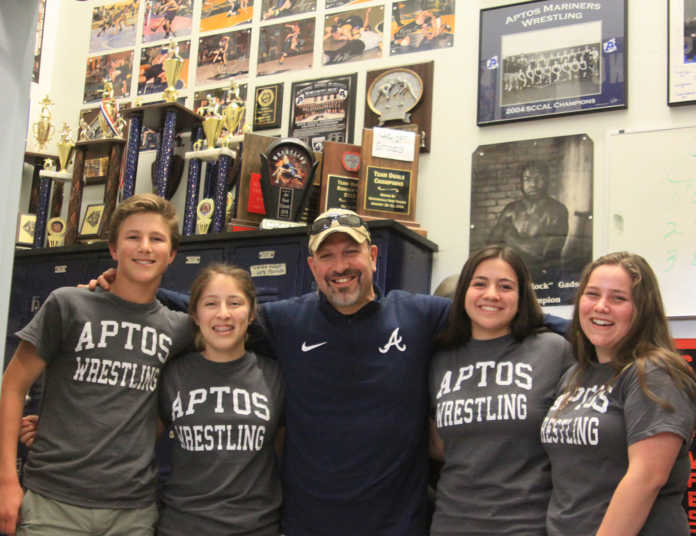 HS Wrestling: Roberts calling it a career after upcoming season — his 20th at Aptos

APTOS — Reggie Roberts, the Aptos High Mariners wrestling coach for the last 19 seasons, will step down from his post at the conclusion of the upcoming winter season.

One of the biggest figures in the Santa Cruz County wrestling landscape and the greater Central Coast Section, Roberts said he had planned to coach until his daughter, Jade, entered Aptos High in 2020 but explained that financial problems forced him into an early retirement.

He will remain at Aptos as an integrated studies teacher and return to college for the sixth time in order to earn enough credits to advance to the next pay scale of the Pajaro Valley Unified School District.

A single father with two kids who recently picked up two part-time jobs to go along with his full-time position at Aptos, Roberts said it would be financially impossible to remain as the head coach and hold all three jobs past this season.

With dozens of former wrestlers and supporters behind him, Roberts asked the P.V.U.S.D. at a recent school board meeting to help him rework some credits from earlier college stints so that he could advance to the next pay scale and finish out his “dream” of coaching until the end of the decade.

“In a perfect world, I coach and I teach until I’m 65 but at the same time I wanted to walk away for my daughter and I guess it’s just going to have to be a couple of years before it was time,” said Roberts, who also has a 6-year-old son named Jaxon. “I’m happy to spend more time with my kids but I’m kind of disappointed that I’ll feel in my heart that there’s going to be some unfinished business.”

In all, Roberts coached high school wrestling for close to three decades, also guiding student-athletes at North Providence High in Rhode Island and Leominster High in Massachusetts, his alma mater.

In his two decade career with the Mariners, Roberts built Aptos into a powerhouse of wrestling. The program had just seven wrestlers when he took over in 1997 but those numbers quickly blossomed into dozens. Last year, he had 80 kids try out for wrestling, a bigger turnout than all other wrestling programs in the Santa Cruz Coast Athletic League combined.

Along with the gigantic numbers, Roberts’ Mariners posted undefeated league seasons from 2010-14 and 2016-17. He also produced 72 individual league champions and several CCS placers. He was also named the NorCal Coach of the Year for wrestling by the California Coaches Association last year.

Yet Roberts never spoke to his wrestlers about wins and losses. He instead preached to the kids about his three rules: (1) learn how to stick together, (2) give what you’ve got that day and (3) enjoy the journey.

“I’m so proud of what we’ve been able to accomplish in the 20 years that I’ve been there,” Roberts said. “Not talking about championships or the amount of wrestlers in the program, but one thing that we’ve been able to give is to allow kids to be kids. Allow kids to play multiple sports and to be able to believe in themselves as a family unit. We were able to accomplish a lot of things with three simple goals.”

His wrestlers said that’s what drove them to wrestle for Roberts.

“It’s a family sport,” said Aptos senior Emma Rodriguez. “It’s not all about yourself. You have to be a team, have fun and always be there for each other. He’s always going to be that guy who always brings everyone together.”

Rodriguez said she first met Roberts as a sixth grader. Like several wrestlers before her, Rodriguez had siblings — older twin brothers, Ben and Jacob — that wrestled for Roberts. She said seeing how he treated her brothers made her want to wrestle for him.

“He doesn’t play favorites,” Rodriguez said. “He’s there for everyone.”

Sophomore Camila Barranco also had an older brother, Miguel, wrestle for Roberts and said she had the same experience as Rodriguez. She felt at home before she ever stepped on the wrestling mat because of Roberts’ easy-going and welcoming presence.

“[For Miguel] wrestling for Reggie made him a better person,” Barranco said. “I had to do it, too. Me coming out to wrestle for Aptos was a really big deal for me.”

Roberts said wrestling did the same for him decades ago.

Roberts did not start wrestling until he was a sophomore at Leominster. He played football in the fall and baseball during the spring but got into trouble during the winter with no sport to play. His football coach Mike Vaillette saw him in the discipline office and gave him an ultimatum: show up to wrestling practice on his own or he would find him and drag him into the wrestling room against his will.

Roberts, not wanting to wear the spandex, snuck on the bus to go home at the end of the day but Vaillette ran him down, got him off the bus and forced him to wrestle.

Roberts, who went on to wrestle at Rhode Island College, said it was the best thing that could have happened to him in that moment.

“Wrestling gave me a purpose,” Roberts said. “I don’t know where I’d be today if it wasn’t for wrestling. I wouldn’t be teaching. I wouldn’t be coaching. I have a good idea of where’d I be. I’d either be in jail or I’d be worse. I had a coach that took an interest in me and showed me that I mattered. That’s the same approach I took here.”