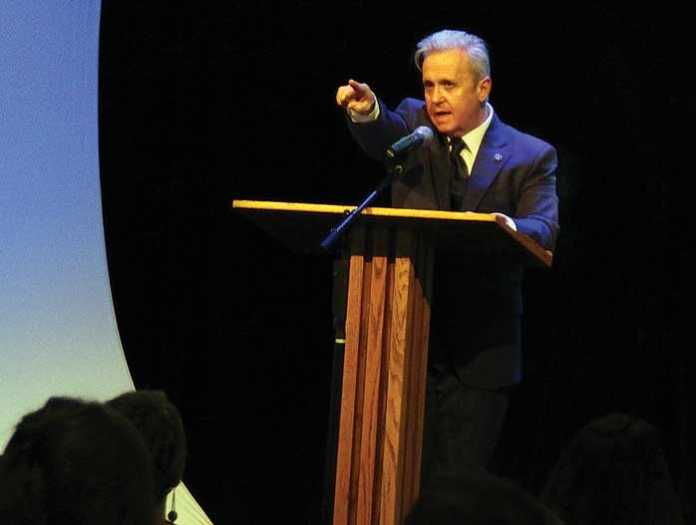 APTOS — For years, Deborah Pembrook told people she became passionate about combatting human trafficking after learning about the issue.

But her story evolved when she realized that she herself had been a victim.

Standing in front of a large audience at Santa Cruz County’s first human trafficking symposium, Pembrook said that, when she was a young girl, a trusted family friend brought her to truck stops and seedy motels to sell her for sex.

When she first told that story at a human trafficking conference in 2007, the organizer told her she had been trafficked.

“That gave me the gift of language, to really accurately name my experience,” she said. “And that started me on the road of healing, being able to talk about what happened.”

At its core, human trafficking occurs when someone is forced to work through force, fraud or coercion, Pembrook said. This work can include labor or sex and can be found in massage parlors, truck stops, construction sites, farms and restaurants.

“It’s very important for all of us to recognize that it really can happen to all sectors of our society, regardless of race, ethnicity, financial status, or whether you have substance abuse issues,” he said.

The idea behind the event, Rosell said, was to educate people from across the county, who could then network and join force to combat the problem.

“The objective here is to essentially raise awareness about human trafficking, try to explain what it is, and try to explain that it is taking place in our community,” he said.

Rosell said that a shift in public perception toward human trafficking has made it somewhat easier to combat. Police no longer pursue criminal charges against victims of sexual trafficking, for example.

“Law enforcement right now really is trying to focus on the people who are doing the trafficking as opposed to the victims,” he said.

Still, thanks to the proliferation of computers and smartphones, human traffickers have gone from operating on street corners to the digital underbelly of the internet, making it much more difficult to find victims.

Worse, victims are often scared to leave their situations, much less seek help or talk to police.

“The difficulty is really getting the people who are trafficked and come forward and testify from a criminal justice system perspective,” he said. “Also in providing services for these people, because they need to re-enter society in many instances.

“So they need everything, because essentially they have nothing.”

TODD GUILD - August 11, 2022
Two local artists have teamed up to create a memorial sculpture honoring Watsonville residents who have died of Covid-19, and are asking for the...