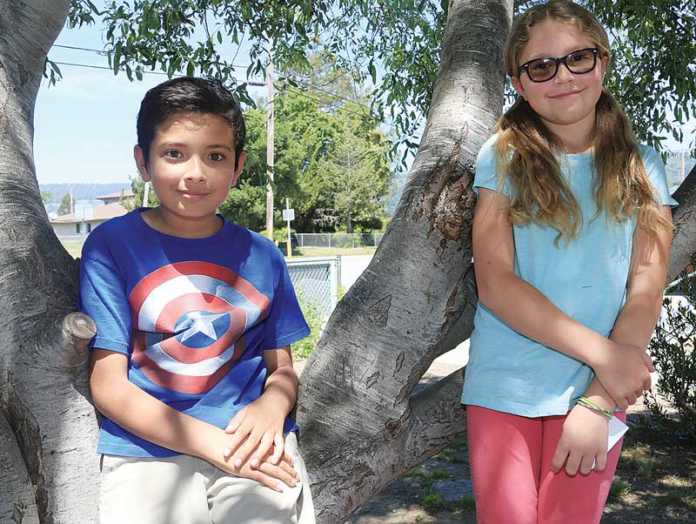 WATSONVILLE — Someday, the rivers of the world could be cleaner thanks to Watsonville Charter School of the Arts (WCSA) fourth-grade student Lillia Young.

Lillia, 10, designed the River Trash Trap, which uses a water wheel driven by moving river water to turn a conveyor belt, which in turn collects trash.

Lillia said she was inspired by a lifetime of lessons on environmental stewardship.

“From a young age I learned how human trash affects our environment,” she said.

While the tiny prototype has not yet been tested in a river, her creation earned her first place in the first-annual California Invention Convention at Harbor High School on Saturday, winning over more than 60 entries from students in fourth through 12th grades.

“I actually didn’t see it coming,” she said. “I saw all the inventions and they were good and worthy winners.”
Samuel Delgadillo, another WCSA fourth-grader, was inspired to create the Foot Sling after suffering through foot surgery to remove a sewing needle. The injury forced him to rely on crutches for three weeks. Weary of holding his leg up, he created a belt-sling combination that did that task for him.

Samuel also won an award for his invention.

“I didn’t think I was going to win, either,” he said. “But I told myself, ‘don’t just sit there in your bedroom, wishing upon a star.’”

Lillia and Samuel will travel to Washington, D.C. in June for the National Invention Convention/Entrepreneurship Expo. There, they will join 300 of their peers who won their state-level competitions.

The invitation-only event is sponsored by the STEMIE Coalition, an acronym that combines science, technology, engineering and math with Invention and Entrepreneurship.

That combination is important in a time when schools are increasingly focusing on STEM disciplines, but students rarely have opportunities to use them to solve real-world problems, said STEMIE Coalition CEO Danny Briere.

Focusing on bringing students’ visions to the marketing table – and guiding them through the scientific design stages – is also a realistic way to prepare them for future job markets, Briere said.

“This teaches them they can decide what they want to do for the future, and if they don’t see a job they want they can make one for themselves,” he said.

Briere said the organization is recruiting schools for next year, and that it can help connect them with their state invention convention, curriculum and with financial resources.

Some 300 students participated in the program, and 10 of those created inventions they brought to the state event.

Another of the state winners created a suction cup system to help tall ladders adhere to walls and yet another one a radar reflector to help self-driving vehicles “see” bicyclists.

A student who created a novel way to clean mud from shoes earned a “most marketable” award, along with a provisional patent.

Employees from such tech companies as Google, Plantronics and Verizon served as judges.

“We had a wide array of talent in the room,” Payne said.

It is important to note, Payne said, that contestants were not judged solely by their inventions, but on the process it took them to reach that final stage.

“We were looking for how much thought they put into coming up with a solution,” she said. “They really weren’t trying to come up with a quick answer. It was a process that was ongoing for several months.”

The final problem will be coming up with the $2,500 it will take to cover the airfare, entry fees, hotel costs and other expenses for the trip to the nation’s capitol, Payne said.

“It will be an invaluable experience for each and every one of those kids,” she said.

To make a donation to help defray the students’ travel expenses, visit www.gofundme.com/cn5hk-help-us-get-to-washington-dc or tinyurl.com/myysrwg.

This Week in Pajaro Valley’s Past, March 12