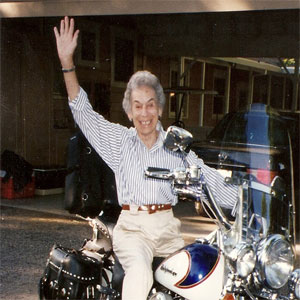 In a room filled with love and her family fixed to her side, Janet left the physical world the same way in which she lived her life – without fear and excited for the adventure ahead.  She was 96 years of age.
Janet was born in Bend, OR, to Frances and Ross Farnham.  She was the youngest of three children, with older brothers Willard and Neil.  Despite their teasing, her brothers were the center of her universe as a child, and continued their unbreakable bond throughout their lifetime.  She attended University of Oregon, where she earned a Bachelor’s degree in journalism.  A few years later, Janet met and married, Tony Meidl of Watsonville, instantly becoming a stepmother to Dick, Bill and Bob Meidl.  In the coming years, Janet gave birth to Mary Lou Abram and Suke Pavlovich.  Her infant son, John, and toddler daughter, Gretchen, husband Tony and stepson Dick preceded her in death.
Janet will be remembered by her kindness, generosity, loyalty, and the incredible way in which she chose to live her life.  She has instilled in her grandchildren and unyielding work ethic, a love for travel and adventure, and the importance of “ironing the creases in your collar”.  No words can describe the passion that Janet had for living life without regret, and having fun.  Her legacy will live on through her family and friends.
Per her request, there will be no formal services, but a celebration of her life will be held at a later date.  In lieu of flowers, Janet requested that should her friends and family desire to do so, donations may be made to the YMCA of Watsonville, CASA of Santa Cruz Co., Watsonville Community Hospital Service League,  Agricultural History Project Of Santa Cruz Co., SACO Slavic American Cultural Organization or charity of your choice.