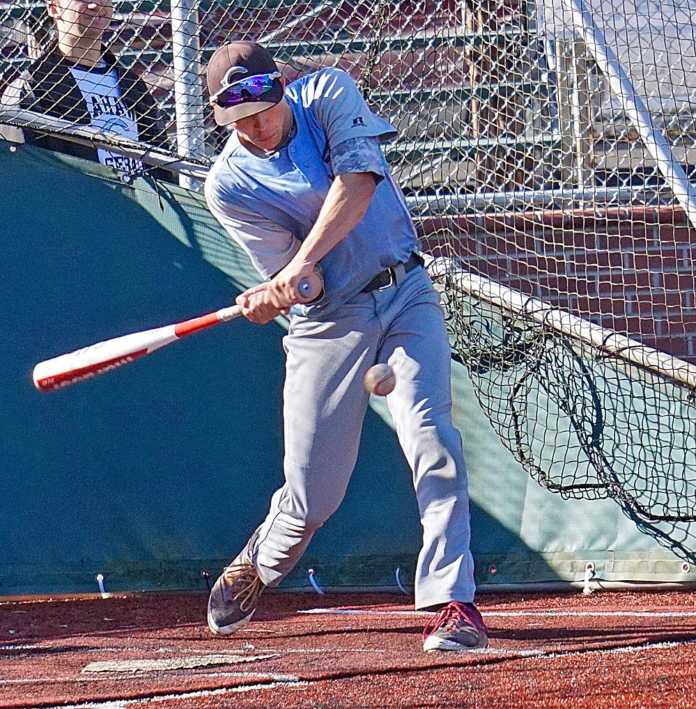 The first tidings of spring are upon us.

Cabrillo College baseball will be back in action today, hosting West Hills College at 2 p.m. in its season opener.

After finishing last year with a disappointing record of 14-24, and missing the playoffs for only the second time in the last nine seasons, the opportunity to take the field once again could not have come soon enough for the Seahawks.

“We are trying to move on from last year,” said Aptos alumnus and sophomore catcher/outfielder Jake Keaschall. “The team chemistry this year is just huge, like everybody gets along, it’s great. It’s fun to be out here, actually.”

The upbeat atmosphere was palpable during Monday’s practice at Harbor High’s state-of-the-art turf diamond, as the team worked through a situational hitting game under the watchful eyes and chiding rasps of coach Bob Kittle and his staff.

Groups of players cycled through turns at the plate with each getting three swings to attempt to score imaginary runners from second and third base. Several balls disappeared over the outfield fence, a welcome sight after Cabrillo smacked just one home run all of last season.

Kai Moody, a shortstop who hit lead-off last year as a freshman for the Seahawks, finished the season with a .333 batting average and led the team in at-bats (159), hits (53) and games played (38).

“This year my goal is to commit less than six errors,” Moody said.

Last season, Moody led Cabrillo in errors committed with 18, three times more than any other player on the roster. The high rate of mistakes is somewhat due to the nature of playing shortstop, as Moody led last season’s team in total chances (202), assists (117) and double plays turned (18).

Keaschall looks to continue to be a mainstay in the line up after he was last season’s most effective power hitter, leading the team in runs scored (24), doubles (10), home runs (1), batting average (.338) and slugging percentage (.432).

The former Mariner’s smooth swing and ability to hit for average and power paired with his invaluable positional flexibility makes Keashcall the prototypical player to be featured in this season’s high-powered offense.

Keaschall hopes to hit for .400 after striking out in just nine percent of his plate appearances last year, and is second only to Moody in walks drawn amongst returning players.

With 46 players on the opening day roster the Seahawks have depth at virtually every position on the field including 13 pitchers, 13 infielders, 11 outfielders and five catchers. However, for the second consecutive season the Seahawks do not have any left-handed pitchers, a fact that does not seem to worry 10th year pitching coach and co-associated head coach Mike DeTano.

“We have a lot of guys who do the same stuff well,” Detano said. “That gives us as a coaching staff a lot of flexibility to monitor guys in high-stress innings.  To me, any inning where the pitcher throws over 25 pitches is a high-stress inning.”

Of all the arms on the staff, sophomore pitcher and San Lorenzo Valley alumnus, Matt Robustelli seems to be particularly critical to the team’s success this year.

After striking out an average of 8.1 batters per nine innings pitched and posting a 3.65 earned run average over 56 and 2-3 innings in his freshman year, Robustelli will need to lead by example with eight of the 13 pitchers on the Seahawks’ staff being freshmen.

Robustelli is used to succeeding under the pressure of expectations, as he was named Santa Cruz Coast Athletic League Pitcher of the Year in 2016 and 2017.

There are 17 players on this year’s roster from Santa Cruz County schools.

St. Francis also has four on the roster, including Cervantes. Josh Kovacs (IF) and David Talavera (MIF) are fresh out of high school, while Conor Bagchee (OF) is a kickback from NCAA Division I Hawaii.

“It’s an excellent bunch of guys to be around,” Kittle said. “This is the most fun we have had with a group of guys. They are tight, they pull for each other. That’s going to go a long ways as far as our season.”

G.P. Scheppler - January 25, 2023
SANTA CRUZ COUNTY—Writer Stephen Kessler has been named the 2023 Artist of the Year by the Santa Cruz County Arts Commission.  Kessler has written a...