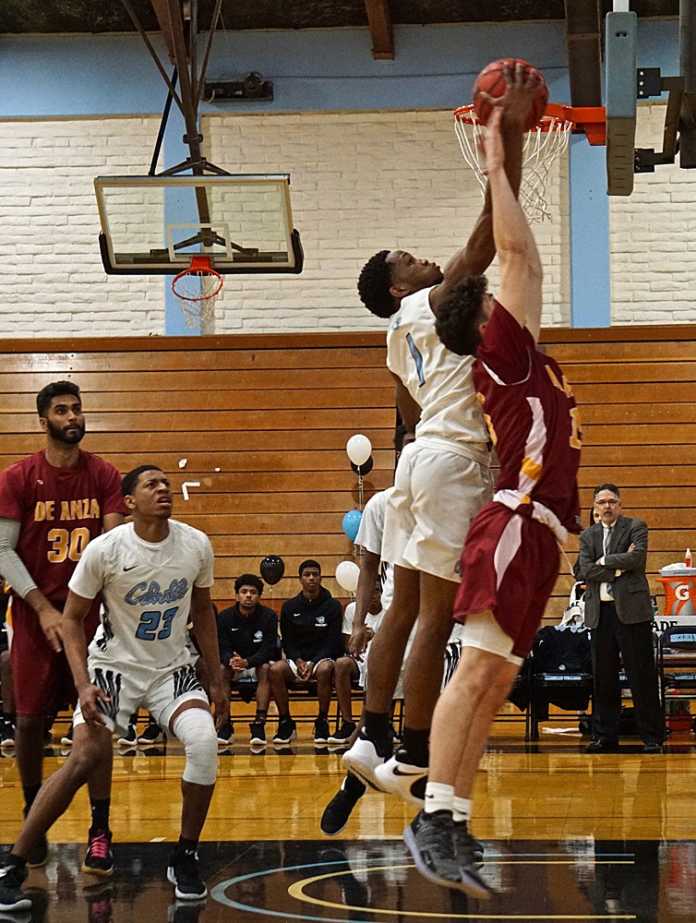 The Cabrillo College men’s and women’s basketball teams are set to host the first round of the California Community College Athletic Association NorCal playoffs tonight in the Adobe Palace against opponents they have already bested this season.

The women’s program was awarded the No. 7 seed after winning a share of its second consecutive Coast Conference South title, and drew the No. 10-seeded College of the Siskiyous Eagles.

The men’s program (20-7) earned the No. 8 seed following a second-place finish in the CC-South, and drew the No. 9-seeded Canada College Colts. The two teams will clash following the conclusion of the women’s game.

The women’s team (18-4) clipped Siskiyous’ wings when they met previously in the Monterey Classic on Dec. 13. The Seahawks emerged with a 13-point victory.

Heleyna Hill flew free through the Eagles’ defense logging a season-high 37 points to aid Cabrillo’s cause.

Last time the men’s program squared off with Canada in Redwood City on Dec. 22, the Seahawks scored a seven-point victory. Cabrillo sophomores Trey Whitley, Yeskin Williams and Lenorris Mincey combined for 50 points, 37 rebounds and 14 assists in the win.

The women’s program responded to a one-point home upset at the hands of Mission College on Jan. 30 with a five-game win streak, in which the Seahawks scored 70 or more points four times. CC-South Coach of the Year John Wilson and his decorated squad of local Seahawks are poised to make a deep run in this year’s postseason.

The Seahawks men’s program enters the postseason without a conference title for the first time in 12 years, and finds a steep road ahead to the school’s first state title under head coach Tony Marcopulos. Despite being swept in conference play by No. 3 seed Gavilan College, Cabrillo’s squad of ballers has the talent and ability to beat the best team in the state, as evidenced by their four-point victory over City College of San Francisco on Dec. 16.

Siskiyous (18-7) rode a six-game win streak to win the Golden Valley Conference title outright, and will enter Aptos with the 11th-ranked scoring offense in the state, amassing an average of 76.6 points per game.

The Eagles are a dangerous road dog tournament team as they went 12-0 in hostile buildings this season.

The Colts (21-7) wrapped up the season finishing third in the Coast Conference North behind top-seeded C.C.S.F., and No. 11 seed Las Positas College.

On the final day of Canada’s regular season, the Colts pulled off a stunning overtime upset over L.P.C. 108-102.