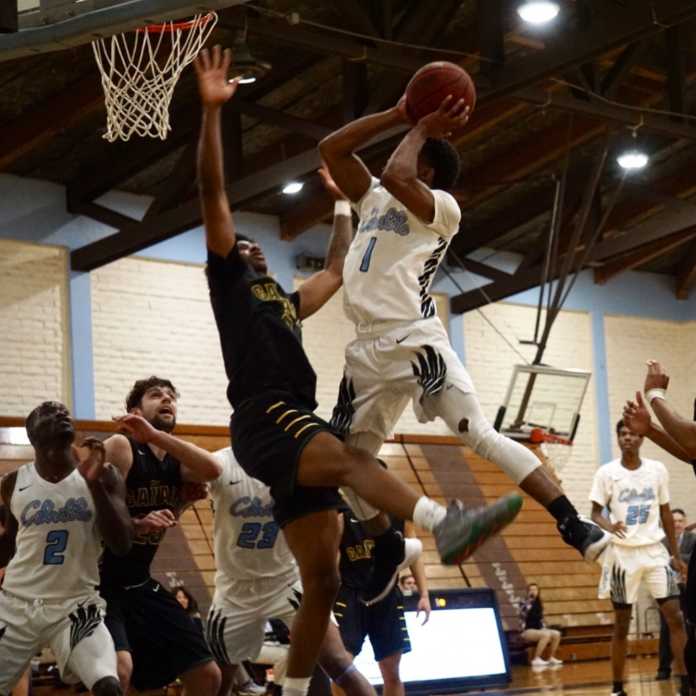 APTOS — In ancient Greek mythology, Icarus was warned by his father to never fly too high, or risk melting the wax that bound his wings together.

In basketball, free throws can be the wings that carry you to victory, or they can be the instrument that brings about your demise.

According to the myth, Icarus didn’t listen, and it cost him his life.

On Friday night during the second round of the NorCal regional tournament in the Adobe Palace, the high-flying, No. 16-ranked Cabrillo College Seahawks’ season-long struggles with free-throw shooting caught up to them, as they fell to the visiting No. 18-ranked Canada College Colts, 64-58.

In the end, what sealed the game in favor of the Colts was a mental mistake by Cabrillo’s coach Tony Marcopulos, who called for a timeout in the closing seconds of the game after center Hunter Seymour made the first of a one-and-one free throw. Moments before calling the time out, assistant coach James Page could be heard warning Marcopulos that their squad did not have any left to call after having just checked in with the scorer’s table.

The two subsequent free throws awarded to Canada from the technical foul proved to be the straw that snapped the season’s back.

“Man, you just have to move on,” said Cabrillo sophomore forward Devon Northcutt. “Sometimes it’s just out of your hands, but that’s the game. It’s over now, but it’s frustrating to end like that.”

Cabrillo drew six times as many fouls in the first half as the Colts (22-7), but after missing seven of their 12 free-throw attempts the Seahawks found themselves trailing by a point at the half.

It proved to be an omen of things to come.

Cabrillo went 16-of-28 from the charity stripe.

In an unexpected twist, it ended up being the team’s best shooter that ultimately cost the Seahawks the chance to advance.

Coast Conference South MVP Trey Whitley went just 5-of-12 from the charity stripe, although his 19 points in the contest were a team-high.

For Whitley, it was the worst free-throw shooting performance of his career, largely a by-product of the bruised hip he suffered last week’s loss against West Valley College.

“It sucks not being healthy,” said Whitley, a sophomore alumnus of Harbor High. “It’s been two-and-a-half years of me nonstop working to get better. Injuries happen, so I am not making any excuses, but it’s frustrating to work so hard and go out like that. It sucks that we came up short, it happens, but I can’t regret anything.”

Cabrillo 78, Siskiyous 74 – Cabrillo managed to outlast the College of the Siskiyous Eagles.

The playoff victory was the first for Cabrillo since 1979, when it won the state championship.

Heleyna Hill, who was also recently announced as CC-South MVP, tuned out the taunts and jeers from the visiting fans to drop a game-high 24 points, four rebounds and five assists.

Hill’s teammate Maddy Miller registered her fourth double-double of the season with 14 points and 13 rebounds.