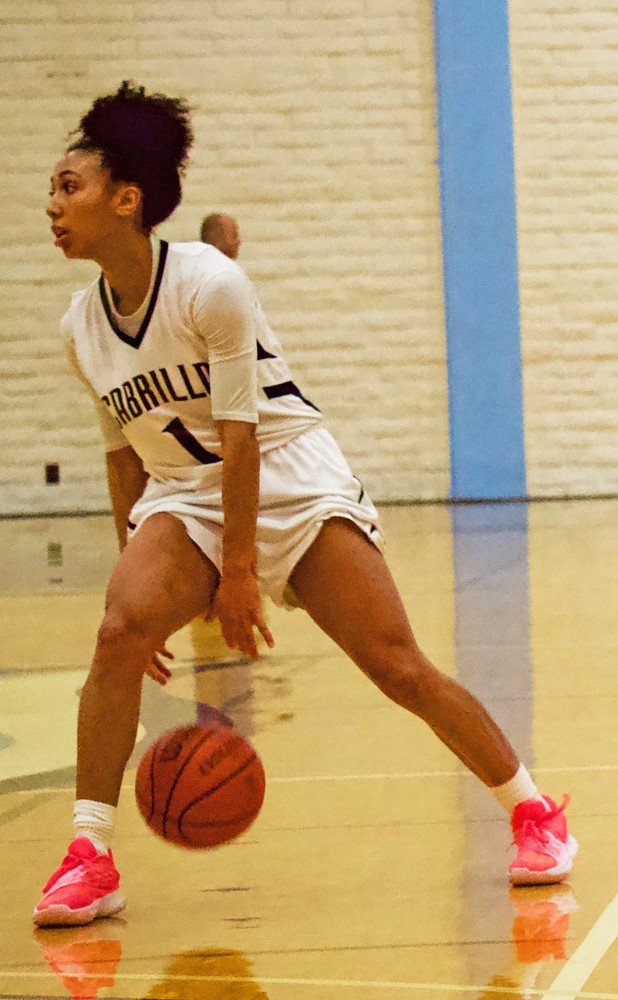 Despite having one of the best female ballers in the state, sophomore point guard Heleyna Hill, on the roster, the Cabrillo College women’s basketball team has demonstrated that it is not invincible.

Coming into Coast Conference South play, the question lingered as to whether the Seahawks’ role players would step up to force opponents to stay honest on the defensive end of the court.

After Wednesday night’s 74-56 drubbing of the Gavilan College Rams (4-10, 1-3) in the Adobe Palace, and the 43-point beat down in Salinas over Hartnell College on Jan. 11, the Seahawks (11-3, 4-0) look like they are starting to find their groove just in time for the heart of conference play.

They may have also found another premier shooter in the process: freshman wing Michaela Thornton.

Cabrillo coach John Wilson’s strategy of varying his defensive looks continued to pay dividends Wednesday night by keeping their opponents thoroughly on their back foot all game. In the past, Wilson and his squads relied on zone defenses to spread the responsibility of protecting the basket. As his team gains confidence in their individual abilities, their advantage is being expanded upon enabling new schemes to show up on the floor.

“They played us man-to-man,” said Gavilan coach Erik Nelson. “Usually they are kind of a triangle-and-two, 1-3-1 mix it up.. We didn’t handle ourselves the way we wanted to, but I am proud of the way we came out in the second half and continued to battle.”

The Seahawks outscored the Rams in three out of four quarters, and the Rams’ two-point scoring advantage in the final stanza was largely against the ‘Hawks bench.

Every time the Rams started to build momentum or looked to shrink the lead, the Seahawks responded by spreading the offensive load away from Hill to outside shooters like freshman Savanah Quintana-Martin.  Quintana-Martin, a Watsonville High alumna, shot a combined 7-of-17 from the floor and was a perfect 3-of-3 on free throws.

Thornton, who attended Soquel High, demonstrated why opposing coaches can no longer scheme just to stop her talented teammate by scoring a season-high 20 points. Thornton shot 8-of-16 from the field and 3-of-8 from 3-point range in addition to pulling in seven rebounds and accumulating four steals.

Heleyna Hill led the game in scoring with 24 points despite shooting 9-of-27 from the floor. Hill’s four assists were also a game-high.

The Seahawks will look to build on their four-game winning streak when they host the Monterey Peninsula College Lobos (6-12, 3-1) tonight in the Adobe Palace.

In other junior college action from Jan. 10-16:

Thornton shot an impressive 5-of-10 from the field to register 11 points for the Seahawks.

Cabrillo’s Dru Chapman, a freshman guard from South Lake Tahoe, led all bench players in scoring with 10 points. Chapman also had three rebounds, an assist and a block in the contest.

• Cabrillo 69, Hartnell 46 – The Seahawks scored a convincing 23-point conference win over the Panthers on Jan. 11 in Salinas.

Sophomore forward Yeskin Williams, of Pearland, Texas, filled up the stat sheet with 19 points, 12 rebounds, five assists and two steals. As he has all season, Williams struggled to maintain control of the ball committing five turnovers in the game.

Cabrillo’s Dymond Hanks, a freshman from Sugarland, Texas, got the first start of his collegiate career and responded with 10 points, four rebounds, four assists and a steal.