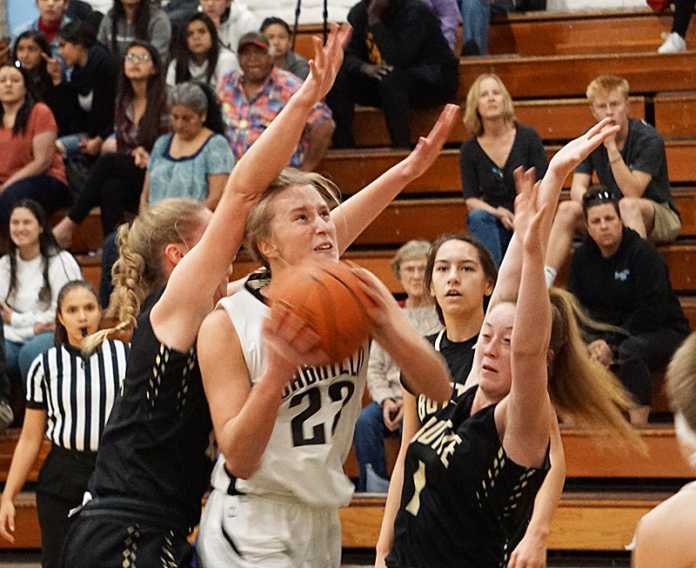 They passed both tests with flying colors, shutting down the Cabrillo College Seahawks and their star guard in a  52-43 win in the Adobe Palace on Dec 22.

In the process, the Roadrunners (6-10) may have exposed a fatal flaw in Cabrillo’s (7-3) strategy for this year’s campaign: the Seahawks’ heavy dependence on Hill’s brilliance.

Hill, a sophomore transfer from San Jose State and a Santa Cruz native, leads the state in points (24.9) and assists (4.7) per game, but managed just eight points and two assists as a result of running up against a game plan designed exclusively to stop her.

“It’s just one of those days,” Hill said. “Obviously, we have to let something like this go, but we do have to see what we did wrong and see what we need to do better. And then move forward.”

Every time Hill touched the ball, she seemed to have at least two defenders trapping her, keeping her and her teammates from ever getting into a rhythm offensively.

Cabrillo shot just 14 percent from the field in the first half.

“We spent this past week elusively game planning to stop (Hill),” said second-year Roadrunners coach Tyler Newton. “I told my team that if we lost down here it wouldn’t be to her so we tried to force the ball away from her all game. When you face such a talented opponent, you have to try and take them out of the game if you want to have any chance to win.”

Butte’s physical sophomore forward Samantha Caires out-hustled her opponents on almost every play for loose balls and rebounds. Her physical post production buoyed a weak shooting day from her teammates and facilitated the win.

As a silver lining, freshman guard Michaela Thornton, a Soquel High alumna, emerged off the bench to lead the Seahawks in scoring with 13 points.  She shot a perfect 2-for-2 from beyond the arc, had two steals and kept the Seahawks in the game until the final two minutes when the Roadrunners put away the game behind solid free throw shooting.

“I didn’t really get the green light, I just went for it and tried to uplift my team,” Thornton said.

After the game Joel Domhoff, a representative from the Geno Panelli Foundation, made a donation to the Cabrillo women’s basketball program to support coach John Wilson and the program he is building.

Panelli attended Cabrillo College from ’84-’85 where he played baseball after graduating from Santa Cruz High.  Panelli was named Santa Cruz County MVP as a baseball player in 1983.

• Cabrillo 74, Canada 67 – Lenorris Mincey, a sophomore forward from Apopka, Florida, erupted with 20 points and 19 rebounds for Cabrillo (10-3) in its road victory on Dec. 22 over the Canada College Colts, bringing their win streak to seven games.

Four out of five starters for the Seahawks scored double digits in the victory and sophomore guard Trey Whitley, a Santa Cruz High alumnus, dished out eight assists. Cabrillo travels to Los Altos Hills this Saturday to take on the Foothill College Owls (6-6).