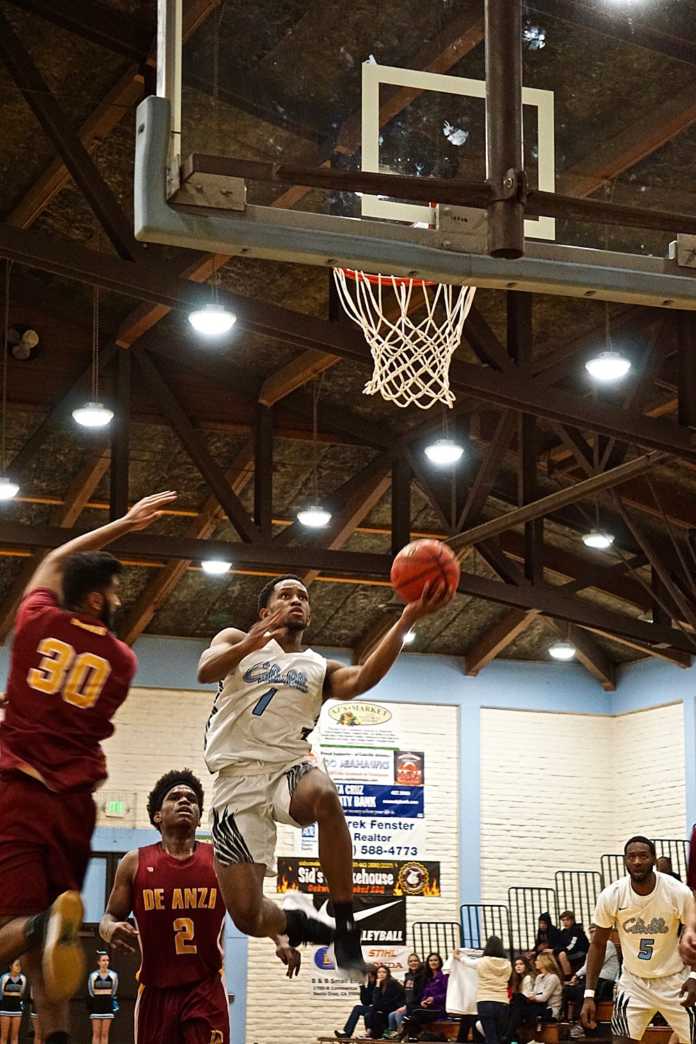 On a night in which the sophomores were supposed to take center stage, it was the true freshmen that stole the show, as the Cabrillo College men’s basketball team closed out its conference home schedule with a 70-63 victory over the De Anza College Dons on Feb. 15 in the Adobe Palace.

The ‘Hawks clamped down on the Dons’ gifted perimeter shooters, allowing them to produce just 75 percent of their usual total output.

Hanks, a guard from Sugarland, Texas, erupted for 29 points on 14-of-21 shooting night from the floor.

Williams, a swing forward from Pearland, Texas, scored 14 points and pulled in 11 rebounds to go along with four steals. It was Williams’ fifth double-double in conference play and seventh overall this season.

The Seahawks close out their regular season schedule tonight in Saratoga against the West Valley Vikings (13-14, 7-4).

Tipoff is scheduled for 7 p.m.

In other junior college action from Feb. 14-20:

• Cabrillo 76, MPC 68 – The Seahawks and their top-ranked defense overwhelmed the host Monterey Peninsula College Lobos on Feb. 18 to lock in a second-place finish in the Coast Conference South.

The game was originally scheduled to be played on Feb. 13, but was postponed after M.P.C. suffered a power loss on campus due to the El Nino storms.

Trey Whitley, a sophomore guard from Santa Cruz, scored 26 points for the Seahawks in the win to go along with eight assists (a season-high), three rebounds and three steals.

• Cabrillo goes through whirlwind – The Seahawks completed the regular season sweep of the M.P.C. Lobos in Monterey on Feb. 18 with a 26-point victory, locking in at least a second place finish in the CC-South.

The Seahawks close out their regular season schedule tonight in Santa Clara against Mission College (16-9, 11-0).

• Seahawks sweep Blue Devils – The Seahawks swept their Feb. 19 double-header in Merced, outscoring the Merced College Blue Devils 18-7 over 15 innings. The second game was called six innings in after the Blue Devils (2-6) were unable to muster a run.

Cabrillo sophomore Miranda Janisch pitched the second game. She struck out four batters and only allowed three hits in the shutout victory.

The Seahawks are set to host a double-header Saturday against the College of Siskiyous (0-5) in Aptos. The first game is scheduled to start at noon and the second game will start at 2 p.m.

• Sierra 8 , Cabrillo 5 – For the second time this preseason, the Sierra College Wolverines (8-1) posted eight or more runs to defeat the Seahawks, this time in San Mateo on Feb. 18.

The Wolverines capitalized on opportunities to score, ending the game with zero baserunners left stranded as opposed to the Seahawks (6-4), who left six runners stranded on base.

Cabrillo’s Kacey Sugimoto drove in two RBIs (14) and drilled her second home run of the year in the loss.

• Cabrillo 9, DVC 7 – The Seahawks continued their hot start by defeating the Diablo Valley Vikings in Pleasant Hill on Feb. 19.

Cabrillo (7-3) sophomore catcher Ryan Juncker left three runners on base, but managed to ground out to second base in the seventh inning to drive in the go-ahead run.