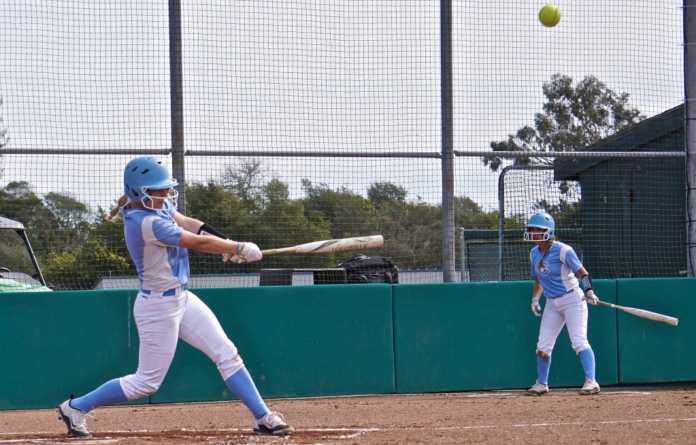 The satisfying “ping” of leather-wrapped cork being launched off double-walled aluminum filled the air around the Cabrillo College softball field on Feb. 23, as the Seahawks flexed their muscles against the College of the Siskiyous Eagles.

After starting the year playing eight of their first 12 games on the road, the Seahawks were eager to showcase what their home crowd had been missing.

Two Seahawks crushed home runs and sophomore pitcher Miranda Jansich threw a complete game of four-hit ball for Cabrillo, as it cruised to victory over the Eagles, 8-2.

But the second game of their double-header didn’t go as well, as Cabrillo fell, 4-3, on a costly error.

Siskiyous’s (1-7, 0-1) pitcher Erica Skelton seemed locked in through the first three innings of Game 1, but struggled to regain control after allowing five runs in the bottom of the fifth inning.

Cabrillo freshman catcher Nichole Garcia continued to thrive in her new position behind the dish, flashing superb defensive skills to go along with her red-hot bat. Garcia went 2-for-3 in the game, including a pitch she smoked over the outfield fence for her second home run of the season.

Maddy Johnson, a sophomore shortstop from Ben Lomond, had an outstanding offensive game providing a home run, a stolen base and three RBI.

In Game 2, the Seahawks compiled nine hits, but a timely error by a freshman infielder ultimately cost them a chance for a sweep.

Savanna Quintana-Martin, a freshman from Watsonville, went 1-for-3 with a run scored just hours after helping the women’s basketball win a share of its second consecutive Coast Conference South title.

The Seahawks (8-5) are set to host Porterville College (6-2) for a double-header on Saturday on campus.

Iram Macias earned his first save of the season in the 7-4 win over S.R.J.C. on Feb. 23 despite giving up a walk and a hit. Macias went on to earn saves in the following two games to bring his season total to three.

Cabrillo (10-3) coach Bob Kittle earned his 200th win on Feb. 23 in Aptos when his Seahawks shut down the West Valley Vikings 4-1.

The game was originally set to be played on Feb. 26 but was rescheduled due to inclement weather.

Gio Besio, a freshman pitcher who attended Westmont High School, has begun to establish himself as the workhorse of the pitching staff throwing a team-leading 29 innings in five appearances.

Besio has only allowed two walks all season giving him a solid 16-2 K/BB ratio to go along with his 3.10 ERA.

• Cabrillo drops opener to MiraCosta – Coming off their 2018 state title, the Seahawks struggled to establish chemistry with their newly announced partners on the courts of Harbor Beach, as they dropped both matches to MiraCosta College on Feb. 22.

For most of the freshman women on the squad, this was their first beach volleyball match, which resulted in a bit of situation overload as they had to manage a partner, environmental factors and the inability of coaches to communicate with them during play.

The Seahawks (0-2) will look to regain their perch atop the Coast Conference on March 15. They host Gavilan College and Foothill College at Main Beach.