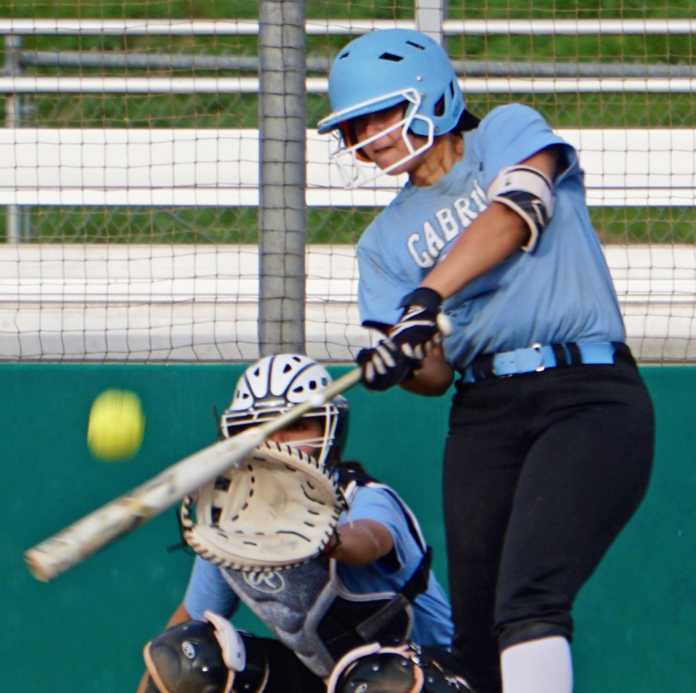 APTOS — It’s time to get back to winning.

Cabrillo College softball has won just 23 games combined over the last two seasons, six less than they won in 2016 alone.

This year’s team is looking to shake off the struggles of the past and hit their way back into a berth in the postseason tournament.

“We have big bats this year,” said sophomore shortstop Maddy Johnson. “And I think our defense is strong. Overall, I think we are really strong.”

After outscoring Taft College in their opening day double-header 24-6, it looks like the bats may be as advertised.

But to win at this level you can’t just have the bats, you need a couple arms too.

Sophomore pitching tandem Miranda Janisch and Brianna Lamb seem to feel that they can step up and fit that bill.

“This team is gonna break records at Cabrillo,” said Lamb, who also plays in the outfield. “I know this team works really hard, and we have a really good group of girls. I think that Miranda (Janisch) and I will be really successful with pitching…As long as her and I are both healthy, we will go far.”

Last season Janisch, a St. Francis alumna, struck out 78 batters in 166.1 innings of work while allowing just 91 earned runs. Janisch hopes to attend Boise State in the fall as a transfer student.

“We’re definitely the underdogs,” Janisch said. “No one should really take us for granted…We do have some really strong girls on this team, like some of them are really short but really, well not short, but they’re small. They are really mighty on the field and up to bat. You should look for our energy in the dugout and on the field, and you will definitely see smiles on all our faces.”

Kacey Sugimoto, a sophomore infielder who played two years for Soquel High, is the tallest player on this year’s roster at 5-foot-9; the average height of the 13 players on the team is 5-foot-3.

The multi-talented Lamb, who hails from Miami, Fla., expects to contribute from the mound as well as at the dish this season. In 95 plate appearances last year, Lamb posted an impressive .819 On-Base-Plus-Slugging percentage while hitting for a .358 average with 34 hits, 13 RBI and four doubles. Lamb also drew nine walks while only striking out five times.

Sugimoto and Johnson combined produced 88 hits, 39 RBI, 15 doubles, 14 stolen bases and two triples. The two sophomore infielders will look to anchor a line up that is freshmen heavy, and provide leadership during the inevitable adversity that awaits all ball players in the spring.

“I think this year is going to be an exciting year,” said coach Kristy Rossinger. “This team has a lot of energy and they are fun to watch.”

The Seahawks ability to win on the road will be tested early in the season, as 14 of their first 20 games will be played away from home. The early road tests will abate down the stretch, as Cabrillo will close out with 11 of 19 games at home.

There are seven players from the area on this season’s roster. Sophomore Madison Gil, freshmen Destinee Farias and Savanah Quintana-Martin hail from Watsonville. Freshman Lauren LaHood is from Scotts Valley and Johnson is from Ben Lomond.  Liana Gonzalez, a freshman, is the lone Santa Cruz High alumnus on the depth chart and Sugimoto represents Soquel.

Despite the recent win-loss totals, coach Rossinger seems secure in her position knowing that she is playing a vital role in the development of her players not just as athletes, but as adults as well. Being a coach at a community college at times means tempering your expectations and rolling with the volatility that comes with such a high and rapid roster turn over.

“Not everyone that comes and plays here wants to play at the next level, and that’s totally fine,” Rossinger said. “The focus for me is getting people where they want to go. I will mold to the athlete and what they want. But in the end, it’s my goal to get them to finish four years of college not just two.”

Editor’s Note: This article will publish in the Feb. 1 edition of the Pajaronian.