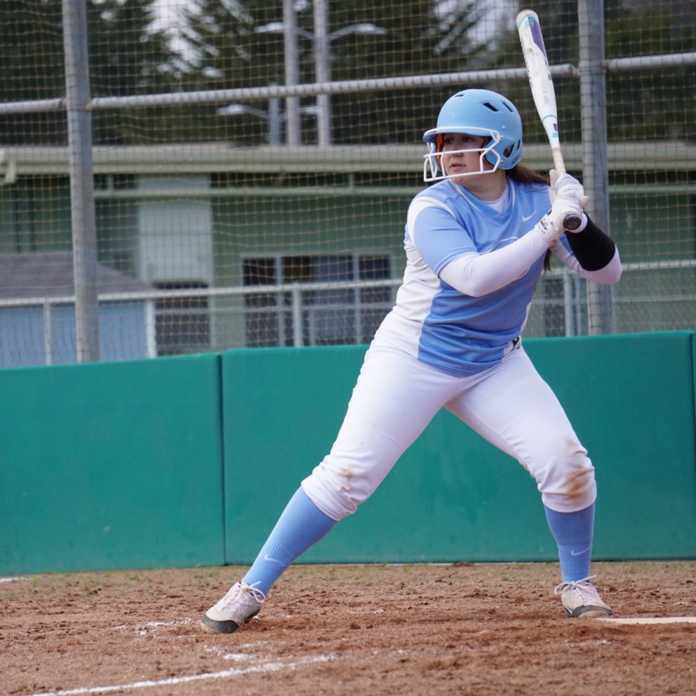 JC Softball: There’s no need to fear, Quintana-Martin is here

APTOS — There isn’t a cape flowing behind the 5-foot-1 Watsonville High School alumna as she strides onto the Cabrillo College campus.

The uniforms she dons are the white, black and sky blue of the Seahawks, not a yellow and red jumpsuit. But that’s where the differences between the legendary superhero Mighty Mouse and Savanah Quintana-Martin end.

“My whole life I was told I am not tall enough, that I am not good enough,” said Quintana-Martin. “But I push that aside and listened to one of my cousins who told me ‘it’s not about your height, it’s how big your heart is.’”

Based on Quintana-Martin’s performance in basketball and softball, her heart is the size of the moon.

After playing meaningful minutes on one of the most successful women’s basketball teams in school history, the true freshman stepped off the court onto the diamond and immediately established herself as one of the premier hitters on the roster.

The 2018-19 women’s basketball team earned a share of their second consecutive Coast Conference South title and won its first playoff game in 40 years.

Over the length of the basketball season, Quintana-Martin was the team’s second most prolific 3-point shooter and the fifth leading scorer averaging 7.8 points per game.

“Savanah is fearless,” said basketball teammate Michaela Thornton. “I love how she is not afraid to take her shot and is not intimidated by anyone. It is motivating playing with a teammate like her.”

Quintana-Martin came off the bench and chipped in 11 points in the second round CCCAA NorCal Regional victory over the College of the Siskiyous.

The next morning, when most would have slept in, Quintana-Martin showed up to take grounders and batting practice. If and when the basketball season came to a close, Quintana-Martin wanted to be ready.

Quintana-Martin, or “Sav” to her teammates, seems equally at home raining down 3-pointers, smashing doubles into the gap, stealing a wayward pass or robbing a hit.

“Sav is a beast,” said softball teammate Brianna Lamb. “She may be little but she has a lot of pop and power with the bat. She is a great person and player who works hard and is super versatile.”

Many student-athletes get so focused on earning a scholarship that the sport they started off loving ceases to be a game.

Instead, it becomes a non-paying job.

Cabrillo student-athletes are expected to attend all scheduled practices, team events and games while also maintaining their academic eligibility. Oh, and try and find time for a social life.

All that goes double for Quintana-Martin, but she manages the burdens with a smile on her face despite spending at least two hours a day commuting.

“I have never had a break in my life,” said Quintana-Martin. “I tell people all the time that I can’t do stuff because I have no time. I love it though, I don’t feel like I am missing out. When I get done playing, I am going to be a coach.”

The once fashionable concept of being a dual-sport athlete past the high school level has become passé in the modern era. The days of aspiring to “be like Bo (Jackson),” the legendary Auburn University alumnus and superhuman who played in the NFL and MLB congruently, has given way to the era of hyper-specialization.

After all, many think that to excel in a sport one must participate exclusively in that domain.

That logic never made sense to Quintana-Martin.

“In high school I preferred basketball,” said Quintana-Martin. “But now, I am really enjoying playing softball. I just really like playing sports, and it’s an honor to be the first person in my family to get to play either at the college level.”

As a true freshman, Quintana-Martin will have one more season to draw attention from four-year schools, but that isn’t the driving motivator behind the long hours and tireless commuting.

Rather Quintana-Martin views the opportunity to be a student-athlete at Cabrillo as a blessing and a privilege. One which she re-earns every day.

It appears big things really do come in small packages.

Editor’s note: This article will publish in the April 5 edition of the Pajaronian.