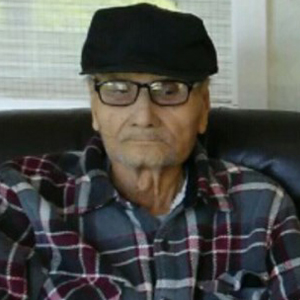 Juan “John” Lerma passed away on Friday, September 8, 2017.  He has joined his two sons, Johnnie and Lico (Elijio), in the heavenly arms of the Lord.  He was 89.
Juan was born on January 4, 1928, in Taylor, Texas, and lived there during his youth, moving to Watsonville, CA, during his early 20s.  He and his wife Fanny (Epifania) raised their two sons, Johnnie and Lico, and a daughter, Lorina, in Watsonville.  He also had close relationships with his brothers Santos and Elijio Lerma, sister Elena Perales, and their families.
During his working years, Juan worked as a truck driver for local businesses, retiring from Sakata Farms in the early 1990s.  After retiring, he became very active in his church, The Gilroy Apostolic Church.  He was at his most joyous when he played the bongos with the church band.  The members of the church became his extended family and an integral part of his life.  He was not only active in church but in his approach to his daily life.  His family would tease him, stating he had more energy than all of them combined.  He would laugh and say it was because he drank “aloe vera juice.”  This became a running joke in the family.  His humor and strength will be missed by all who loved him.
Juan is survived by his wife of almost 70 years, Fanny Lerma; his daughter Lorina Lara (Bob) of Modesto, CA; granddaughters Trinidad Lerma Fleck (Jacob) and Reina O’Neal (Nicholas); grandsons Ernie Lara, Bobby Lara (Melinda), Johnny Lerma, and Eric Lerma; eleven great-grandchildren and one great-great grandson.  He is also survived by his brother Santos Lerma (Lydia) of Watsonville, CA; and several nieces and nephews, all of whom he adored.  He was preceded in death by his parents Luis and Francis Lerma, his brother Elijio Lerma, sister Elena Perales, and his sons Johnny and Lico Lerma.
Services will be held at Mehl’s Colonial Chapel on Friday, September 15 with visitation from 10:00 to 11:00 am and funeral service to begin at 11:00 am. The graveside service will be held at Valley Public Cemetery at 1:00 pm.