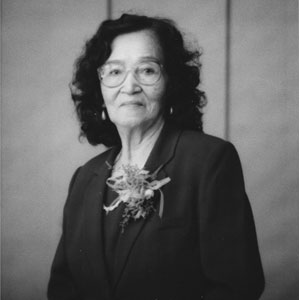 Juana Valdez Hernandez went home to be with her Savior on May 5, 2017. She was 94 years old.
Juana was a resident of Watsonville, CA for 53 years. She was born on January 22, 1922 in Don Diego, San Luis Potosi, Mexico to Matilde and Maria Sanchez Valdez.  She married Sebastian Hernandez in 1939.  They immigrated to the United States in 1945, and after a few years in Texas, they settled in Watsonville in 1954.  Juana was a strong, hard-working woman and a loving wife and mother.  She is survived by four sons: Fidel of Stockton; David and Paul (Teresa) of Hollister; Oscar (Vickie) of Santa Cruz; seven daughters: Geneva (Jack) Blake of Oregon; Connie Moran of Watsonville; Maria (Jerry) Gass of Iowa; Stella (Salvador) Rubalcava of Watsonville; Annabel Hernandez of Orange; Linda (Tony) Lara of Sunnyvale; Corina Hernandez (Letty) of  Bakersfield; and numerous grandchildren and great-grandchildren. She is also survived by two sisters, Engracia Perez of Watsonville and Angela Valdez de Benitez of Mexico.
She was preceded in death by her husband and three sons, Blasito, Francisco and Eddy; her father and mother; five brothers, and one sister.
A memorial service is scheduled for Thursday, May 18, 2017 at Ave Maria Memorial Chapel, 609 Main Street, Watsonville, CA.  A public viewing will be from 10 a.m to 12 p.m followed by a memorial service from 12 p.m.- 1:00 p.m.  Internment will follow at Pajaro Valley Public Cemetery.  There will be a reception at the VFW Hall, 1960 Freedom Blvd. from 1:30– 4:00p.m.
Arrangements have been entrusted in the care of The Carroll Family of Ave Maria Memorial Chapel, www.avemariamemorialchapel.com