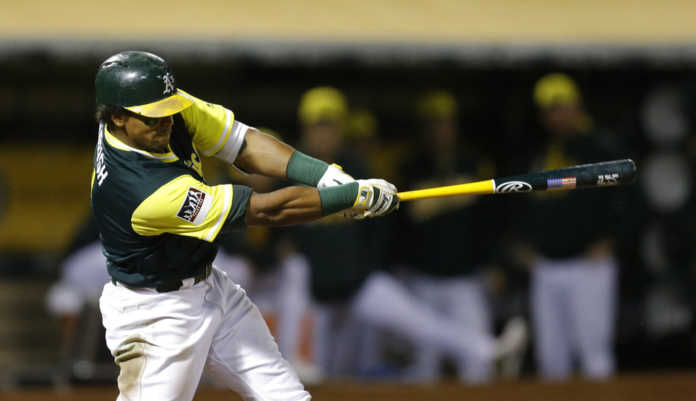 OAKLAND — Khris Davis sees no need to talk up his home run-hitting power from the past two seasons, even after he had a career-high 42 last season and brought his 2017 total to 36 with two more Friday night.

Davis, wearing “Khrush” on his jersey for Players Weekend, hit a go-ahead homer leading off the seventh after his tying solo shot in the fourth to power the Oakland Athletics past the Texas Rangers 3-1 on Friday night.

“He’s always one swing away from doing what he does best,” A’s manager Bob Melvin said of Davis. “For a while there we have one hit and it’s a home run by him. We’ve got a tie game and he hits another home run. Pretty impactful bat, even when he’s struggling we feel like he’s a guy we have to have in there.”

Kendall Graveman (4-4) struck out six and didn’t walk a batter in seven innings, improving to 3-0 at home in his fifth start back from a stint on the disabled list. He allowed one run and nine hits.

Davis notched his 15th career multihomer game and fourth this season, then Matt Chapman added an RBI single insurance run in the seventh.

“They come and go in bunches, so as long as I make those streaks last longer than the bad streaks I’ll be all right,” Davis said.

Adrian Beltre hit an RBI single in the first before Davis’ one-out drive in the fourth tied it.

Blake Treinen — Oakland’s second reliever following a scoreless inning by Chris Hatcher — finished the 2-hour, 26-minute game for his sixth save since coming to the A’s in a July 16 trade with the Nationals.

Martinez (3-5), called up from Triple-A Round Rock to make the start, struck out seven with two walks in seven innings and allowed three runs and four hits.

“Just a curveball that I meant to bounce, it didn’t bounce, and he crushed it,” Martinez said of Davis’ second drive.

This marked the AL West clubs’ first meeting since the Rangers swept a three-game series at home from May 12-14 and the initial meeting of 10 remaining games between the teams. That includes two of the season’s final three series and a four-game set to conclude the year.

“It’s not like I’m sitting here digging myself,” Eckersley said in the dugout afterward. “It’s a really neat thing. Most people don’t get that to happen to them.”

Rangers: Manager Jeff Banister wasn’t sure yet whether CF Carlos Gomez would be activated from the DL on Saturday when eligible. Gomez had a cyst removed behind his left shoulder and has been sidelined since Aug. 16.

Athletics: The A’s placed RHP Paul Blackburn on the 10-day disabled list retroactive to Aug. 23 with a bruised right hand after he was hit by a comebacker from Baltimore’s Trey Mancini leading off the fifth inning Tuesday after working four scoreless innings. “Just not responding well enough for him to throw a bullpen and then make his start,” Melvin said. “The prudent thing to do is back date him a couple days whatever it was, put him on the DL and hopefully he recovers in time to make his start soon thereafter when he would come off.” … Oakland recalled RHP Michael Brady and OF Mark Canha from Triple-A Nashville. Canha was set to start in CF on Saturday. … The hope is that Jake Smolinski, rehabbing after missing the entire season recovering from right shoulder surgery, still could play in the outfield come September. “It just depends on whether or not he can do it. Right now he’s throwing OK, I don’t think he feels great as far as his throwing,” Melvin said. “We’re still not sure if he’s going to be able to play the outfield yet in September. We’re forecasting him to but I’m not sure what the timetable would be.”

ASSOCIATED PRESS - September 20, 2021
Two years ago Amy Thomas, principal at Watsonville Charter School of the Arts, noticed that her students were getting a bit restless during and...