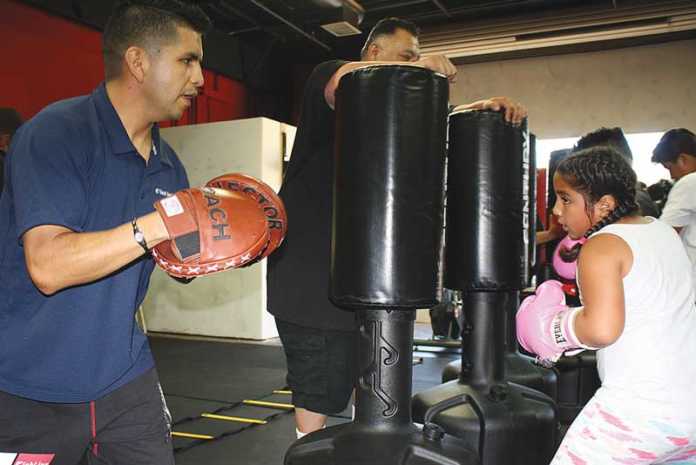 WATSONVILLE — Fledgling nonprofit Watsonville Boxing Academy is floundering in its efforts to find a home months after opening its doors to dozens of local kids.

The saga begins with a series of successes — Watsonville native Hector Retana had long dreamed about providing local children access to his much beloved sport of boxing. After building a thriving program in Salinas, which garnered support and a building from the city and mayor, he decided to focus his efforts on his home town.

“I have been here 49 years, I’ve been these kids,” Retana said. “My parents worked in the fields. I was left alone and I know what manipulation is; how older kids manipulate younger kids to become gang members. That was me, and I don’t want that happening here.”

So he made a goal to create somewhere safe for the neighborhood youth to go between 3 p.m. and 8 p.m. That’s when he and his wife Claudette Retana met Mauricio Romero and started the nonprofit Watsonville Boxing Academy with a goal of empowering youth and keeping them off the streets and away from gangs.

“There are so many kids who don’t get out of their home environment or peer groups, and this is one way that [they] are able to spread their wings a little,” Claudette Retana said. “We let them know there are other things out there for them than just what’s on the street. There’s no life for them out there.”

And when you help the youth, according to Claudette Retana, you affect the whole community.

Classes started at Freedom Fit Club with five kids, operating out of a facility on Hangar Way twice a week, and has since grown to include more than 40 participants. But they have outgrown the facility and last week were told to suspend their classes altogether.

“We can’t train, so we are looking for a bigger facility,” Hector Retana said. “Imagine, if we had it full-time, there would be over 100 kids off the street.”

The issue stems from a change in the lease holder for the Hangar Way facility they have been working out of. While Elkhorn Slough Brewing Company is the one that currently holds the lease, just three months ago the lease for that particular suite was held by Scott Morimoto of Freedom Fit Club. Morimoto had decided to end his lease agreement, and wanted to transfer his lease to the owners of Santa Cruz Core Fitness. Instead, the building owner transferred the lease to the brewery and Santa Cruz Core Fitness became the primary subletter.

In the process, the Watsonville Boxing Academy slipped through the cracks, with some parties saying they were completely unaware there was even a nonprofit there.

“When we switched up the agreement, we were not aware of the nonprofit or the kids,” co-owner Jaimi Jansen of Santa Cruz Core Fitness said. “We just knew there was someone in there teaching boxing and there were concerns about safety and people taking advantage of the space.”

At first, she said they tried to keep the classes going to allow them time to transition. The services she offers veer away from organized classes and instead focus one-on-one with their clients.

During the beginning of July, Santa Cruz Core Fitness told Morimoto that the boxing classes would have to be discontinued. Now August, the nonprofit has been unable to find an affordable place to operate.

“We have been flexing, trying to accommodate something that is out of the norm for us,” Jansen said. “I will be calling [the Retanas] to see if we can help in any way possible. We absolutely want to have a conversation with them.”

For Morimoto, he said he had known he wouldn’t be able to stay forever, but with time running out, he isn’t sure where to turn to next.

“We knew we had to be out of there eventually, we don’t have much of a choice, but we were trying to keep the programs going for the kids so they have a place to go,” he said. “We need a location, and hopefully the city can help us.”

For a group intent on helping children stay off the streets and out of gangs, facing homelessness is a giant hurdle for the nonprofit, and the concern extends to the price of rent. The more they have to pay, the more they have to charge the students and the farther away they are from achieving their ultimate goal of being affordable for everyone.

Hector Retana recalled how he couldn’t afford the fees associated with boxing as a child, and how he eventually dropped out, embarrassed. These feelings are part of why they are looking at ways to reduce cost, and eventually become an income-based program.

“We are here to train the kids so they don’t get swallowed by gangs or violence or child abuse or bullying,” Retana said. “We want them in a safe spot, and healthy and if we invest in our kids now it will pay off in the future. We want a great city for our grandkids.”

And they have already seen some successes. The children that do participate have shown dedication, heart and a desire to go far in the sport.

“Some of the kids, they are coming here with weight issues, some of them are very shy and being bullied,” Romero said. “We tell them, ‘I am not training you to hit people out there, I am training you to get your self-esteem up so you don’t have to run from anybody.’”

Amy Ferrel-Perez, 9, is a student who has decided she wants to be the “female best boxer” since beginning at Watsonville Boxing Academy.

“Here is where I feel happiest,” Amy said. “I feel excited. I feel everything.”

Going down a list of punches and moves and exercises that they do, she said she loves it because it is an activity she can learn. She breaks away to go back to swinging punches, her pink gloves blurring under the watchful gaze of the instructors.

“We are very grateful that Freedom Fit Club is working with us, but it is not just about fitness — we train to compete, which we have been doing for six years,” Hector Retana said.

Most recently they were nominated and recognized at the Desert Showdown International Championships. There, Watsonville Boxing Academy’s Ed Bueno won the first place title belt and Mauricio Romero won second place. In addition, Hector Retana said he was one of 15 coaches nominated by the Desert Showdown Committee as a coach “who makes a positive impact on kids and the community.” Retana said this was because of his six years of coaching in Salinas and for what he is trying to do here in Watsonville.

For right now, they are focusing on this latest success as they have “officially put Watsonville on the map with USA Boxing.”

Watsonville Boxing Academy will be holding a fundraiser Sept. 9 at Carmona’s BBQ Deli, 1040 East Lake Ave., to help raise funds for a facility. For information, contact Claudette Retana at [email protected] or 419-1827.