The 2020 U.S. Election saw a record turnout, with more Americans voting than in any election in more than a century. And with the high number of voters came plenty of landmark wins—including for LGBTQ candidates in all levels of government.

LGBTQ representation in Congress will hit an all-time high in 2021, and a record-breaking number of candidates have been elected to state legislatures. In Delaware, Sarah McBride became the first transgender person elected to any State Senate in the U.S. In Florida, Shevrin Jones became his state’s first LGBTQ senator.

Dutra says he is “thrilled” that the mayors of the two largest cities in the county will be LGBTQ.

“It is definitely a moment in history that will be archived and remembered,” he said. “But it’s more than that. It’s hope for our future leaders… It will give them hope that anything is possible, no matter who you are or who you love.”

In addition to Dutra and Meyers, there were a number of other LGBTQ candidates who won local races. Steve Trujillo won a seat on the Cabrillo College Board of Trustees. Nancy de la Peña is now Santa Cruz County’s first LGBTQ judge elected to the superior court.

Meyers, who was elected to the Santa Cruz City Council in 2018 and has served as Vice Mayor for the past year, says she is “very excited” about the concerted effort nationwide to get more representation in office.

“Communities are made up of diversity,” Meyers said. “It is so important to have all perspectives… to identify the needs of everyone.”

Dutra and Meyers credited the career of current California State Senate member-elect John Laird. In 1983, Laird was elected as Santa Cruz’s first openly gay mayor. The fact Laird was gay was in the newspapers before he could be sworn in. TV crews from across the state showed up. At the time, there were only a handful of LGBTQ officials in the U.S.

Laird says he didn’t know how it was going to be received. Now, however, he is glad he was so open about it.

“My job was to be the best mayor I could… but to be clear about who I was,” he said. “Whatever credibility I gained I’d spend on making clear that it’s a good thing to be LGBT. It changed people’s views. That was my goal.”

Laird went on to become one of the first openly gay men to serve in the California legislature. He also held office as the Secretary for Natural Resources, and helped form the first LGBTQ Caucus.

“This community has always been supportive, and now we also have the ability to be on the frontline of policy,” she said.

Much of that local support has come from organizations such as Diversity Center Santa Cruz County, which has been advocating for LGBTQ rights since 1989. Local historian Rob Darrow said the center has remained a safe space for people to discuss their political aspirations.

“What we are seeing today [is] the result of the longstanding programs and spaces provided in the past,” he said.

Santa Cruz County has been a progressive region for LGBTQ rights for decades. In the 1970s, Santa Cruz adopted anti-discrimination ordinances and was the third city in California to organize a Pride event. In 1978, the county helped stop the Briggs Initiative, which proposed to outlaw gay or lesbian teachers in public schools.

The results of the 2020 election may be a culmination of all that history and progress. Still, Dutra said, they have a long way to go.

“It’s an exciting moment, but it does give me pause,” he said. “Why did it take so long? [Donna and I] are only the second gay mayors since Laird… it’s been nearly 40 years.”

Watsonville in particular has progressed slower than the rest of the county. It was not until 2008 that the city had its first Pride event. The Pajaro Valley Pride organization was formed in 2016, aiming to transform the otherwise conservative area into a more accepting place for LGBTQ residents.

Having representation in office, Dutra said, is crucial to Watsonville’s future.

“It’s important that people can see a reflection of themselves in the people who serve them,” he said. “Whether you’re white or Black, gay or straight, Catholic or Muslim… there are things that affect all of us.”

Since the election, Dutra has been preparing to take office. He said he is extremely thankful to the community and eager to serve his hometown.

“I’m overwhelmed by the support I received,” he said. “I promise to work for all of us—no matter who you are.” 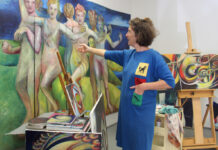 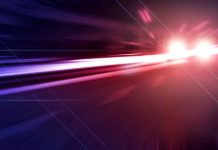 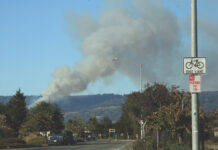 Johanna Miller - October 19, 2021
WATSONVILLE—Judy Gittelsohn has big plans for the downtown Watsonville arts scene. For the past two months, Gittelsohn has been slowly but surely moving her artwork,...