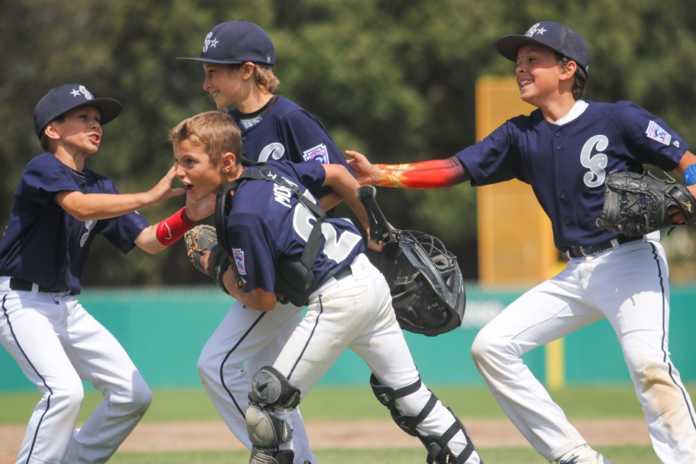 WATSONVILLE — Capitola-Soquel All-Star pitcher Dylan Hull recorded a complete game shutout on Saturday in a 7-0 win against the Aptos Little League All-Stars in the District 39 11s championship at Franich Park.

Hull finished the afternoon with 65 pitches and racked up five strikeouts, including three in the sixth inning that closed out the game.

“That was cool and it meant a lot to me,” said Hull about getting the shutout win in the championship game.

Capitola-Soquel manager T.J. Moran said as cliche as it sounds, his all-star pitcher has ice water in his veins.

“(Hull) just goes out there and it’s him and his catcher and they play the game together,” Moran said. “Nothing rattles him and he’s got a solid defense behind him, so he’s confident.”

Moran said he was excited to get back to the championship game after leading the 10/9 year-old team to the title last year against Live Oak.

“I’m excited that the boys had an opportunity to get to this game and be able to close it out with a solid win,” Moran said. “It’s what you play for all year. So I’m just happy for the boys.”

Capitola-Soquel All-Star pitcher Dylan Hull recorded a complete game shutout on Saturday in a 7-0 win against the Aptos Little League All-Stars in the District 39 11s Championship Round. (Juan Reyes — Pajaronian)

“That’s been the key to our run through the tournament and that was key in the game today,” he said.

Moran said it was a true team effort and the substitutes made some big contributions, including scoring four of the seven runs while they were in the game.

“That’s something that I’m proud of because those kids don’t get a lot of playing time on the field but when they came up to hit they all contributed. I’m really happy about that,” Moran said.

Hull said it took him a couple of innings to get settled in but credits the guys behind him for having his back.

“I felt a little bit nervous at the start and then I feel like my team really picked me up,” Hull said.

The defense was clutch by coming up with two big time double plays to get Hull out of a couple of jams.

“They literally made every single play for me and that’s why they had no errors,” Hull said. “Cooper (Lastition) made a great catch in the outfield and I feel like that helped me a lot.”

Moran said great defensive play such as getting two double plays in a game isn’t something that happens quite often at this level of play.

“We’ve done it a few times this year so I’m really proud of it,” Moran said.

“It was pretty important,” he said. “It helped emotionally for our whole team when that happened.”

Work tried to tag out Whelan at home plate but he was called safe and put Capitola-Soquel up 1-0. They added two more runs, including a sacrifice fly by Jake Escalante, to take a 3-0 lead after the first.

Aptos came back strong in the top of the second and threatened to score with runners on second and third base.

But Hull managed to shake it off and struckout Gavin Boston to keep the shutout in tact.

In the third inning, Capitola-Soquel first baseman Justice O’Shaughnessy hit a grounder to Aptos shortstop Dylan Bergh but he was unable to secure the ball.

The throw to first base was too late and two runners came across home plate to extend the lead to 5-0. Capitola-Soquel added an insurance run in the fifth to help seal a 7-0 victory.

Next up for Capitola-Soquel is a matchup against the District 59 champion in the California Section 5 All-Stars Championship Round on Saturday at Doglione Park in Salinas.