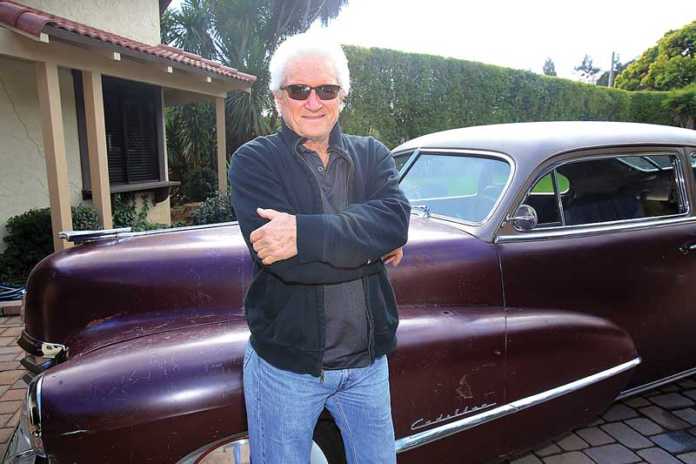 CORRALITOS — When Dennis Jacobsen was 12, he was already fascinated with Cadillacs.

Since then, he has owned the same Cadillacs as actress Elizabeth Taylor and comedian Phil Harris, and his affinity for them has only grown stronger.

His father began driving Cadillacs in 1948, but Jacobsen said it was his uncle who drove his passion home.

“My uncle was wealthy, he had a new convertible every year and would let me drive them before I could legally drive,” he said. “It’s an old car now, not like driving new cars.”

In his youth, he was not always the most careful of drivers, he said, with his dad having to take his car away from him out of fear for his safety.

“When I was a kid, I drove it like an absolute maniac,” Jacobsen said. “I really should be dead, the temptation was too great to get into trouble.”

Today, Jacobsen owns three Cadillacs and divides his time between restoring and enjoying them.

The decaying patina of a 1947 Cadillac is a sharp contrast to the polished and refined look of his 1941 convertible 62 Series Cadillac, but both have a home with Jacobsen.

The 1947 he has already had to have towed back twice, but still he keeps it moving.

“I want to start on the interior,” he said. “I am debating stripping or keeping the patina…”

Jacobsen spent his young adult years in Southern California surrounded by celebrities and cars. In the evenings, he and his friends would all take their lowered custom cars out — it was “paradise.”

Now, he said cars like his have their own fan club, with a handful of his own friends participating side by side. Bringing out his convertible though means drawing a crowd of at least five people no matter where he goes, he said.

“It’s a magnet,” Jacobsen said. “They just love it, they ask questions … Most want to know what it is.”

The maroon convertible with red leather interior and white wall tires is all at original factory specifications. A flathead 140 horsepower engine sits under the hood, and the hub caps are 3/4 to allow for the rims to be painted and displayed to match the interior. The sleek body of the car is even spared the unsightly eye sore of a gas cap, which is cleverly hidden underneath the left tail light.

“I was fortunate to find it,” Jacobsen recalled. “It was restored in 1995 back east, and I got it back here and healthy.”

Between nostalgia and fascination, Jacobsen said at the end of the day, he just likes Cadillacs.

“They are very interesting cars,” he said. “They are in my soul.”