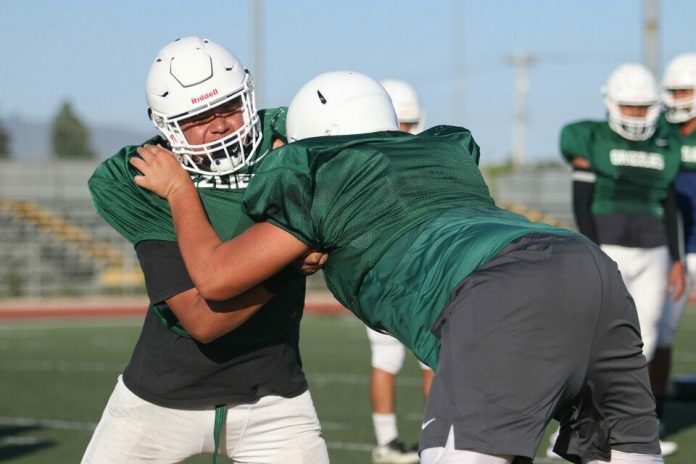 Pajaro Valley High School athletic director Joe Manfre said the decision will give coaches a chance to see their students once again and vice versa.

Manfre, who is also the interim football coach, said the guidelines present new obstacles for team practices. But, he added, getting students outside and working out with their teammates is win.

“There’s a lot of hoops to jump through and lots of guidelines, lots of things that we have to do to get ready to start working out,” he said.

It’ll be a challenge for Pajaro Valley High. The school still does not have its own facilities for outdoor sports such as football, as its multi-sport stadium is currently under construction. Manfre said they will attempt to work out at multiple sites such as Rolling Hills and Cesar Chavez middle schools and Starlight Elementary School.

“But to actually try to do some football stuff you would definitely have to think very far out of the box,” he said.

Workouts will be designed for cohorts of 12 students at one time per sports program and coaches will only be allowed to work with one cohort.

Student-athletes cannot share a ball or equipment of any kind during workouts. The weight room and other indoor facilities will also not be available.

Watsonville High School football coach Anthony Valdivia said they’re going to comply with the guidelines by placing 12 players at a time with one coach. The groups will occupy the football field, varsity and JV baseball fields and the softball fields.

“Try to get them to a place where if and when we are able to do football stuff,” he said.

Watsonville High School cross country coach Rob Cornett said the guidelines are similar to what they already do within their sport.

“For us, it’s going to be no different,” he said. “We put kids in speed groups based on their abilities, so I don’t see that being too much of a problem.”

Cornett said the only tricky part they have to worry about is moving runners who start to excel from the “lower pod” into the “higher pod.”

“But that’s something we can figure out,” he said.

The document was developed using the California Interscholastic Federation’s “Return to Physical Activity/Training Guidelines” along with the California Department of Education’s Stronger Together reopening guide. The guidelines state that there will be zero tolerance for student-athletes or coaches who willfully violate the physical distancing or general guidelines.

Any violations will result in removal for the duration of the program.

PVUSD Superintendent Michelle Rodriguez said there are also varying risk levels for different sports. She said it would be unacceptable to decide between two options: have sports or nothing at all.

“I would say that would not happen,” she said. “Some sports have higher levels of risk than others, there will most likely be more modifications to some sports than other sports.”

Rodriguez said she wants sports to move forward only if they can do it safely for both students and coaches.

“Because I think that athletics is an important component of the high school and middle school experience,” she said.

Cornett said he’s a little concerned whether or not it will eventually turn into an “all or nothing” principle. The fall sports include cross country, field hockey, football, girls golf, girls tennis, girls volleyball and water polo.

Cornett said a fall season is not guaranteed. He said he hopes that districts will allow certain sports to play out and not scrap the entire season for everybody.

“I know it happened in the spring but [Covid-19] was so new,” he said. “But now we’re pretty much assured that contact with inanimate objects is not as bad as we thought.”

Manfre said it would be a victory for the student-athletes, coaches and schools if sports of any kind are allowed in the fall.

“No matter if it’s one sport or all the sports,” he said. “I definitely don’t want to hold back one sport that could go just because other sports can’t go.”