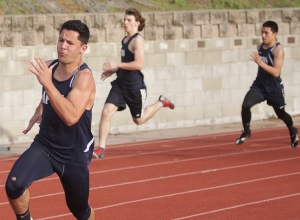 Aptos won all but one of the 16 events.

Daniela Salazar and Stephanie Villa were double-winners for Watsonville.

Jackson Collins and Ian Koenig each hit a double.

Brigg Busenhart (15) and Luca Peruzzi (14) combined for 29 kills and Zach Magner made 42 assists for Mt. Madonna, which plays at Harbor on Wednesday night at 6:30 p.m.

The Mariners play at San Lorenzo Valley on Wednesday at 6:30 p.m.

• Aptos 12, Pacific Grove 11 – Will Patterson had four goals and an assist, Jackson Carver made five assists and the Aptos Mariners scored three times in the fourth quarter to beat Pacific Grove 12-11 on Wednesday night.