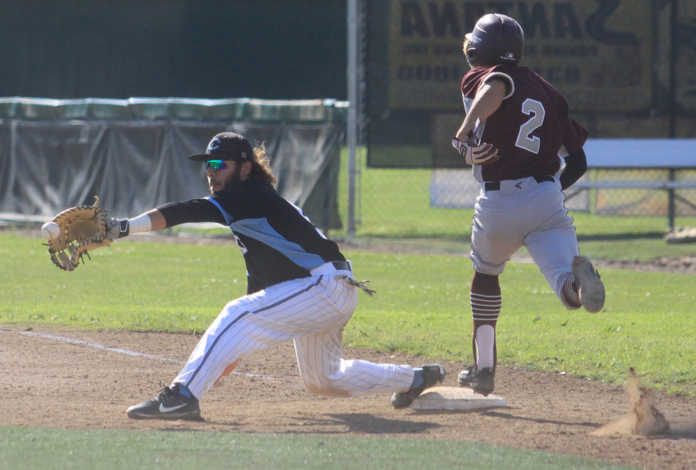 The Cabrillo College Seahawks exploded for 14 hits in their 10-2 Coast Conference Pacific division win over Monterey Peninsula College on Tuesday in Aptos.

Brett de Geus picked up his eighth win of the season on the mound. He tossed seven innings and allowed only three hits, an earned run and a walk, while striking out eight.

• Pajaro Valley 15, Marina 3 – The Pajaro Valley High Grizzlies halted a 41-game losing streak on Tuesday with a 15-3 non-league win over Marina High on the road.

Rocky Ramirez picked up the win on the mound after striking out 11 batters over six innings.

Blake Biscotti had four goals and two assists, Lucas Junod also netted four scores and made an assist and Patrick Peoples chimed in with three goals and an assist.

• Hiltz sets top college mark – Aptos High alumnae Nikki Hiltz recorded the fastest 1,500-meter mark in the nation among NCAA Division I female athletes while competing for the University of Arkansas Razorbacks on Saturday at the Bryan Clay Invitational in Azusa, Ca.

Hiltz, a redshirt junior, finished with a time of 4 minutes, 12.71 seconds, which was the fifth-best time in the program’s history.

Pajaronian Staff Report - July 1, 2022
WATSONVILLE—Pajaro Valley Arts (PVA) will host a one-day conference on July 9 centered around the figure Our Lady of Guadalupe.  Attendees will explore the historic...