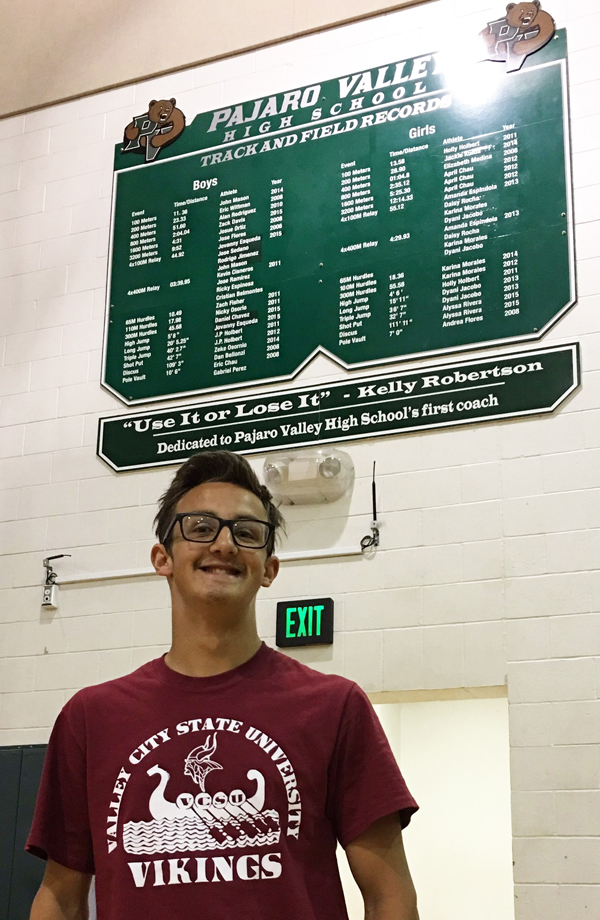 Davis was a four-year varsity standout in cross country and track and field at Pajaro Valley, qualifying for the Central Coast Section meet multiple times in both sports.

Davis went on to run two seasons at Hartnell College in Salinas for the reiging CCCAA NorCal Champion Panthers.

Dylan McPhillips tossed a complete-game, five-hitter but took the loss for the Mustangs (8-10, 4-9), who travel to Salinas High today at 4 p.m.

Ian Koenig was 2-for-3 with a double, while Tyler Clark and McPhillips each drove in a run.

Dylan Vargas picked up the win on the mound, tossing four innings and allowing a hit, a run and a walk while striking out eight.

Matt Perko was 2-for-3 with an RBI and a walk and Forrest Hays doubled, drove in a run and earned a walk.

Gianna Vanni picked up the win in the circle. She scattered eight hits and walked two while striking out eight.

Vanni was also 3-for-5 with double and an RBI. Mariah Gonzalez had double and two RBIs. Jessica Enriquez also doubled.

For North Monterey County, Michaela Galli was 2-for-5 with a double. Amber Duplissie went 2-for-4 with a double, an RBI and a scored run.

The ‘Catz will try to bounce back today at Gilroy High at 4:30 p.m.

Lena Ciandro was 2-for-5 with a pair of doubles, three RBIs and three scored runs.

Ariana Azevedo was 2-for-2 with a double, three runs and an RBI. Anna Noto knocked in four runs and finished 2-for-4.

• Ohlone 3, Cabrillo 0 – The Cabrillo College Seahawks were shut out by Ohlone College, 3-0, on Tuesday in Coast Conference Pacific division play in Aptos.

Brett de Geus took the loss for the Seahawks (26-12, 12-4) despite allowing only three hits and three walks with no earned runs and six strikeouts. Clayton Andrews tripled.

Cabrillo, which is locked into a second-place finish in the CC-P behind Ohlone, travels to Hartnell College today at 2:30 p.m.

Scotts Valley’s Ben Edens was the medalist, firing a 36.

St. Francis’ David Vasquez shot a 42, while Izzie Mendez and Jason Kane followed with a 46 and 48.

Pajaronian Staff Report - August 11, 2022
Two local artists have teamed up to create a memorial sculpture honoring Watsonville residents who have died of Covid-19, and are asking for the...