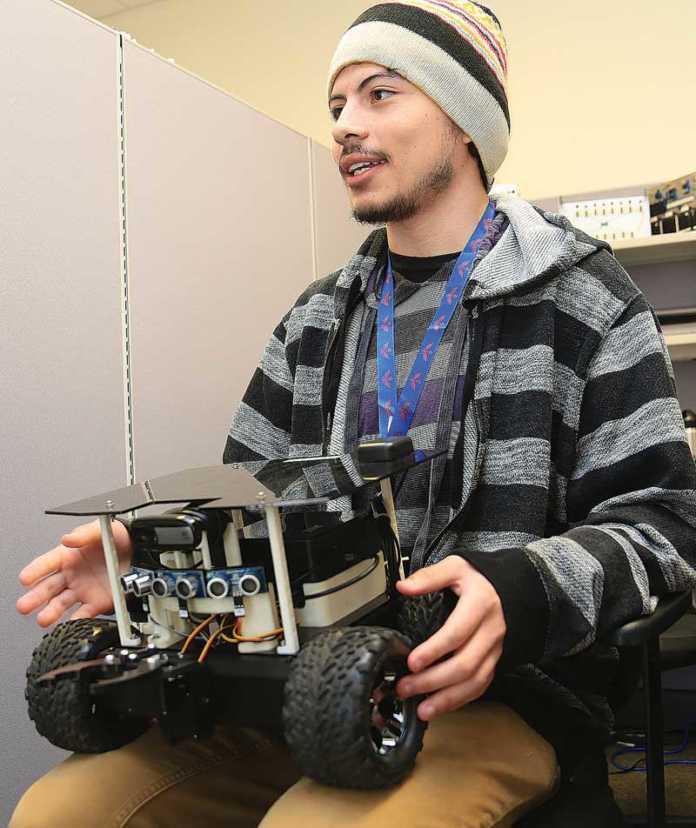 APTOS — One year after taking top honors in an engineering competition designed to train aspiring space explorers, the Cabrillo College Robotics Club is returning to the arena.

The club next week will compete in NASA’s second-annual Swarmathon in Cape Canaveral, Fla., where contestants will attempt to program several small robots designed to work together to explore a simulated planet.

The idea of sending a “swarm” of smaller robots to an alien planet — as opposed to a single larger one — is a relatively new idea in space exploration. It is modeled after the communal, foraging behavior of ant colonies.

The swarm can test multiple locations for resources such as water and minerals, thus making a single mission exponentially more efficient.

According to NASA, a group of 20 robots can travel and search 26 miles of linear distance in eight hours without recharging, which is the same distance traveled by the Mars Exploration Rover Opportunity in 11 years.

At the same time, the difficulties of space travel — from surviving the launch, the six-month journey to Mars and the landing — make sending a single rover a risky proposition; one failure dooms the entire mission.

Arturo Sejudo, who graduated from Watsonville High School in 2016, said he was hooked on the idea of the competition the minute he set eyes on one of the “swarmies,” which come with GPS navigation, SONAR, a webcam and a grabber arm.

Sejudo said he has enjoyed the challenges posed by meshing programming skills and engineering knowledge.

“It’s exciting,” he said. “You get to apply something that you learn in the classroom in real life.”

Last year, Cabrillo’s Robotics Club took first place in the virtual portion of the competition, testing their computer code to control virtual “robots” as they looked for resources in a computer simulation.

This year, however, Cabrillo Computer and Information Systems Instructor and Robotics Club Advisor Mike Matera wanted to take it a step further.

The club has built its own robots and will compete in the physical competition. They will pit their skills against more than 600 students from 40 schools, whose robots must find and retrieve several cubes without any assistance from them.

“A simulation doesn’t match the difficulty of navigating in the real world,” he said. “Having a robot adds a real degree of challenge.”

Matera was busy Monday planning the trip for seven people, which will include a visit to the Kennedy Space Center.

Matera was quick to add that he is looking forward to the competition, and that the outcome doesn’t matter.

“The reality is that they have already won,” he said. “They get a really great education and a great opportunity.”

The Second Annual NASA Swarmathon will be held at the Kennedy Space Center in Cape Canaveral, Fla. from April 18-20.

For information, visit the Robotics Club website at www.sites.google.com/site/cabrillorobotics/home or the Cabrillo College Robotics Club Facebook page. The club has a GoFundMe page set up to raise funds for their upcoming trip, at www.gofundme.com/se3mz2-robotics-competition.