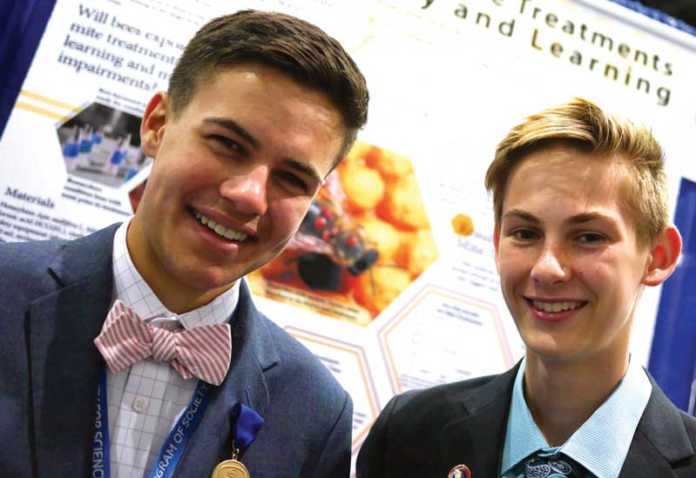 LOS ANGELES — A pair of students from a Santa Cruz-based home school program took a top prize earlier this month at the Intel International Science and Engineering Fair (ISEF) in Los Angeles.

Sophomore Max Freedman and freshman Jackson Damhorst from Alternative Family Education Program won the prize on May 19 for their work with honeybees.

Their winning streak began when the team won best overall project at the Santa Cruz County Science Fair, then they earned first place at the California State Science Fair.

They won fourth in animal sciences at ISEF for their work with honeybees.

The project also earned a special recognition from the Monsanto Corporation for innovative merit. In total, they collected $2,550 in prize money.

Max said he enjoyed meeting students from around the world who share his passion for science, as well as several Nobel Prize Laureates.

“It was a really incredible experience to attend the International Science Fair,” he said. “We were really proud. We worked hard, and it was great to have it pay off.”

While researchers have studied the effects of harmful chemicals such as insecticides on bee colonies, this project was the first to study the effects of chemicals that are meant to benefit bees.

Max said the research can help beekeepers make better choices about how they care for their bees.

Intel ISEF is the world’s largest international pre-college science competition, with students from more than 75 countries competing for a prize fund totaling $4 million.

Millions of high school students worldwide compete through hundreds of science fairs to be one of the 1,800 finalists selected for the culminating ISEF competition.

The boys studied how honeybees respond to treatments used by beekeepers to prevent losses from Varroa mites, which are debilitating parasites that are linked to the collapse of bee colonies.

In their study, the students collected bees from Max’s hives and trained them to recognize a scent. Then they treated them with two different mite controls and retested to see if the bees maintained their memory. They found the treated bees experienced memory losses that persisted up to three hours.

The research showed that when bees are confused or experience memory loss, they will not be able to forage or pollinate successfully.

Jackson and Max’s research could help beekeepers choose alternative treatments for their bees and may even lead to developing safer treatments to manage Varroa mites.

“We’d like to share our work with other beekeepers to help them with their colonies,” Jackson said.