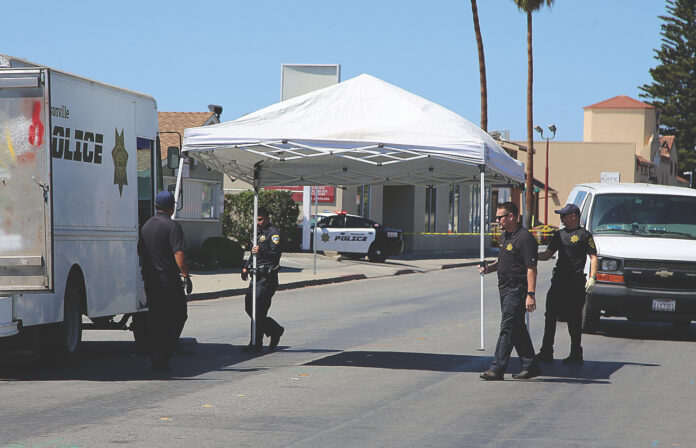 Watsonville Police Sgt. Jarrod Pisturino  said the shooting took place around 11:16am between the 100 block of Brennan Street and the 100 block of Sudden Street in a large parking lot shared by the YMCA, Harrision’s Color Corner and Santa Fe Market. Police cordoned off a huge slice of downtown from foot or motor traffic between East Lake Avenue, East Fifth Street and in front of numerous Brennan Street businesses.

When police arrived on the scene they found a 19-year-old victim with multiple gunshot wounds. He was pronounced dead at the scene, according to a WPD Facebook post. No other injuries were reported.

As of 4pm police were still combing the parking lot.

Among the flurry of gunshots, four bullets traveled through the front wall of Salon Hair We Are at 21 Brennan St., which also houses The Pajaronian.

Little information was available at the scene. Police combed the parking lot of the Watsonville Woman’s Club, and an adjoining medical center where the victim was found.

A large crowd of people gathered, some sobbing and embracing one another outside the crime scene that was hemmed in with yellow crime tape. One woman cried out loud, “My baby, my baby!” A man watching the drama unfold, said, “Someone shot and killed my family member.”

A crime scene investigations van, the Sheriff’s Coroner van, scores of patrol cars and around a dozen law officials filled a broad staging area in the center of Brennan Street where families came and went with their laundry at the nearby Laundry Day business.

Pisturino would not comment if evidence, like a gun, was found at the scene or if there were any suspects.

This story will be updated.

An earlier version of this story incorrectly stated that the shooting took place in the YWCA parking lot.

Mariners looking to make some noise in league play | Girls...