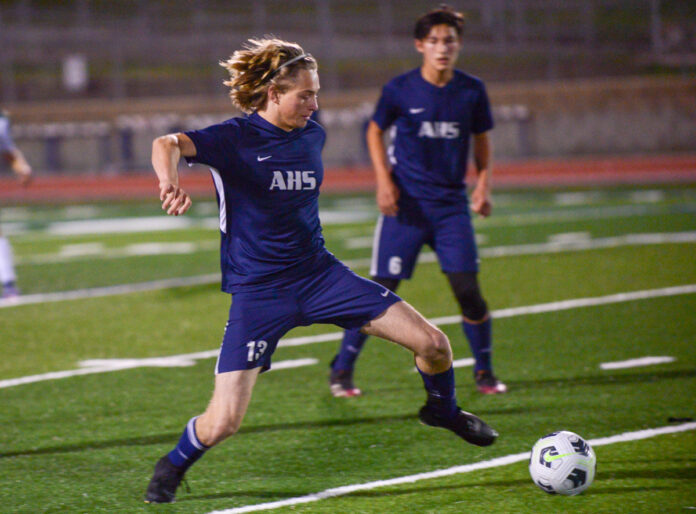 Fredys Abrego scored twice for the Mariners in a 3-0 win against San Lorenzo Valley High in league action on Jan. 13.

Abrego scored on a cross from Patrick Mackle in the 11th minute, followed by a second half goal that was assisted by Nate Dow.

Carlos Gutierrez scored off a cross from Diego Tiran in the 48th minute that gave the Mariners a 2-0 lead. Goalie Ulises Hernandez made four saves.

Aptos coach Roberto Zuniga said the team continues to improve and build chemistry throughout the season.

“Tonight we collected three points with this win but we know that there’s a lot of work to be done and always room for improvement,” Zuniga said. “Our coaching staff is pleased with the team’s continued progress.”

Aptos 1, Santa Cruz 1: The Mariners battled against the Cardinals to a draw in SCCAL play on Jan. 11.

Nate Dow headed in a corner kick from Fredys Abrego in the 25th minute for the Mariners, who took a 1-0 lead going into halftime.

Santa Cruz senior Tristen Bjork scored on a pass from Rowen Rawlings in the 63rd minute.

Pajaro Valley 2, Gilroy 1: Esteban Sepulvada scored twice for the Grizzlies in their win against the Mustangs in PCAL Mission Division action on Jan. 13.

Andres Rebollar was credited with two assists, and goalie Luis Vega made two saves for the Grizzlies (2-6-2, 1-0-1), who host King City on Tuesday at 3pm.

Pajaro Valley 2, Monterey 2: Juan Mora scored twice for the Grizzlies in a draw against the Toreadores in the teams’ PCAL Mission Division opener Jan. 10.

Angel Gomez was credited with an assist on one of the goals, and goalie Luis Vega made three saves for the Grizzlies.

Watsonville 2, Salinas 1: Senior Isaac Vargas scored twice for the Wildcatz in their win over the Cowboys in PCAL Gabilan Division play on Jan. 13.

At North Salinas 1, Watsonville 0: Luis Godinez scored on a pass from Isaac Rios to help the Vikings beat the Wildcatz in the teams’ PCAL Gabilan Division opener Jan. 11.

Santa Cruz 3, Aptos 2: The Mariners were edged by the Cardinals in the final minutes of the teams’ SCCAL game on Jan. 11.

Senior Jazmine Castañeda scored in the 52nd minute for the Mariners, who trailed 2-0 in the first half. The assist was credited to senior Gwen Chapman.

In the 74th minute, senior Malia Kessler tied the score at 2-all. The game was extended with nearly 10 minutes of stoppage time, which allowed the Cardinals to score the game-winner in the 89th minute.

Pacific Collegiate 2, Monte Vista Christian 1: Jana Komposch scored an unassisted goal for the Mustangs in their loss to the Pumas in PCAL Mission Division play on Jan. 11.

Pajaro Valley 4, Pacific Grove 0: Valeria Acosta scored twice for the Grizzlies in their shutout win over the Breakers in PCAL Cypress Division play on Jan. 14.

Goalie Mariela Cisneros made five saves for the Grizzlies (6-4-1, 2-0-0), who play at Monterey on Wednesday at 3pm.

Pajaro Valley 3, Seaside 2: Valeria Acosta scored the game winning goal for the Grizzlies in a win against the Spartans in the teams’ PCAL Cypress Division opener Jan. 12.

Acosta netted the go-ahead score in the 65th minute that was assisted by freshman Yadira Gonzalez.

Gilroy 3, Watsonville 1: The Mustangs scored two unanswered goals in the second half to earn a win over the Wildcatz in the teams’ PCAL Gabilan Division opener Jan. 12.

Sophomore Aubree Rodriguez scored for the Wildcatz on a pass from Julissa Felix. Goalie Julianna Mendez made five saves for Watsonville (5-5-1, 0-1-0), which plays at Christopher High on Wednesday at 5:45pm.

Coaches are encouraged to report scores and highlights to [email protected] following games. Please include your name and contact number in the email.